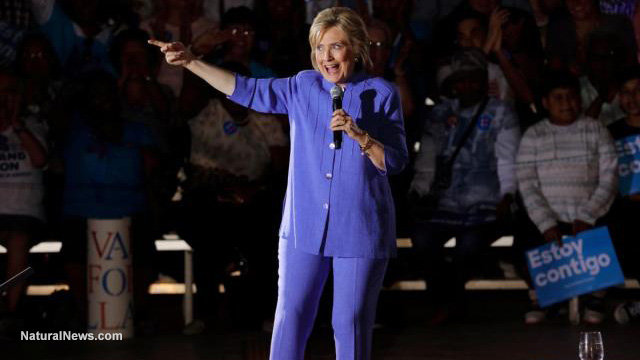 (NaturalNews) So the leftist media, after announcing a cash award for audio and video that might be damaging to Donald Trump, has unearthed an old recording where he spoke in lewd, crude terms about women. The media has exploded the story to gargantuan proportions… but have you ever wondered if the other candidate for President ever said something nasty?

Prepare yourself, because the words attributed to Hillary Clinton in this article are far beyond anything Trump was caught saying. This list is found in the highly recommended book The Clinton’s War on Women by Roger Stone.

— Hillary to Arkansas state troopers at the guardhouse as she was pulling out of the governor’s mansion on Labor Day, 1991 (The First Partner, p. 192).

— Hillary to her Arkansas state trooper bodyguards, after one of them told her “good morning” (American Evita, p. 90).

— Hillary to a state trooper who was driving her to an event (Crossfire, p. 84). Larry Gleghom, a former state trooper, said: “She was a bitch day in and day out” (The First Partner, p. 119).

4) “That sorry son of a bitch.” According to Larry Patterson, this was a common phrase that Hillary used to describe Bill back when he was governor of Arkansas.

5) Former FBI agent stationed to the White House Gary Aldrich said, “[Hillary] had a clear dislike for the agents (US Secret Service), bordering on hatred…. Two Secret Service agents heard Hillary’s daughter Chelsea refer to them as ‘personal, trained pigs.’… The agent on the detail tried to scold Chelsea for such disrespect. He told her … he believed that her father, the president, would be shocked if he heard what she had just said to her friends. Chelsea’s response? ‘I don’t think so. That’s what my parents call you'” (Unlimited Access, p. 90).

6) “If you want to remain on this detail, get your f**king ass over here and grab those bags.”

— Hillary to a Secret Service agent who is trained to keep his hands free at all times to protect his boss. According to countless witnesses, this kind of demanding and demeaning behavior and attitude is very common for Hillary over the years. CNBC host Chris Matthews commented on Hardball on July 17, 2001, as quoted on Newsmax in August 2001, that he had seen the Secret Service carry bags for Senator Hillary on the train. “Who in the Senate gets a sherpa to carry their bags for them? Who pays the airfare for this guy? Who pays for his life-style? Who pays his salary to walk around carrying her bags? This looks pretty regal.”

— A typical comment from Hillary to Secret Service agents throughout the 1990s (Hillary’s Scheme, p. 89).

— Hillary to her Secret Service detail (Unlimited Access, p. 139). Author Ron Kessler wrote, “Secret Service agents assigned at various points to guard Hillary during her campaign for the Senate were dismayed at how two-faced and unbalanced she was” (A Matter of Character, p. 2).

— Hillary to a Secret Service agent after reading an article, written by a UC Berkeley student, which was critical of Chelsea Clinton, a new high-profile Stanford undergrad. The student was subsequently interrogated by the Secret Service (SFGate.com, November 26,1997).

— L. D. Brown, Bill’s favorite state trooper, while at a county fair in Arkansas in the early 1980s. They had just spoken to “salt of the earth” country Arkansans who wore bib overalls and cotton dresses. Brown also said that Hillary would reduce grown men state troopers such as Trooper Mark Allen to tears with her vicious attacks (Crossfire, p. 85).

— Hillary to a friend after a well-meaning supporter gave her earrings shaped like Arkansas Razorbacks (Blood Sport, p. 105).

15) “I want you to do damage control over Bill’s philandering…. Bill’s going to be president of the United States…. I want you to get rid of these bitches he’s seeing…. I want you to give me the names and addresses and phone numbers, and we can get them under control.”

— Hillary instructing Ivan Duda in 1982, a full sixteen years before the Monica Lewinsky scandal broke (The Truth About Hillary, pp. 98-99).

— Hillary literally was the de facto co-president with Bill Clinton and she demanded to have Vice President A1 Gore’s office, which was in proximity to the Oval Office. Gore told Clinton that he would go public with it and embarrass the new administration if Hillary got that office space. Hillary, despite her screaming and profanity-laced fits throughout Inauguration Day, did not win this battle (Bill & Hillary, p. 258).

— Hillary to Bill in front of the media on Inauguration Day (The Seduction of Hillary Rodham, p. 321).

19) “Gentlemen, I have looked at your proposal, and it’s pure bulls**t! Now you’ve had your meeting! Get out!”

— Hillary to insurance executives who had just given their input on the Clintons’ health-care bill. (Unlimited Access, p. 88).

— Hillary on the phone excoriating President Clinton because he had suggested a health-care proposal that differed from hers (The Survivor, p. 118).

— Hillary chewing out the president in front of guests (US News & World Report, February 5,1996).

23) After Hillary had heard some bad news about Whitewater, Lieutenant Colonel Buzz Patterson describes the scene: “As soon as the elevator closed, she exploded at the president with a spew of four-letter words. Every vulgar word you’ve ever heard poured from her mouth: ‘God***nit,’ ‘you bastard,’ ‘it’s your f**king fault.'” Patterson said Bill just hung his head, took the abuse while the Secret Service agents and a doctor looked on mortified. (Dereliction of Duty, p. 68).

24) “You stupid f**king moron. How could you risk your presidency for this?”

— Hillary talking about Vice President Bush in approximately 1984 while the Clintons and Bushes were facilitating the CIA drug trade of the 1980s (Crossfire, p. 69).

— Hillary said to aides right after her comments to Matt Lauer in January 1998 that a “vast right-wing conspiracy” was out to get the Clintons (The Case Against Hillary Clinton, p. 162).

27) “These women are all trash. Nobody’s going to believe them.”

— Hillary spotting one of President-elect Clinton’s girlfriends on the day before they were heading to Washington, DC, from Little Rock in early 1992 (Inside the White House, p. 245).

— Hillary’s reaction when finding out that Bill was missing from the Arkansas governor’s mansion one night. (Inside the White House, p. 240).

— Hillary to Governor Clinton as he was hitting on an attractive woman at a campaign event in Arkansas (Inside the White House, p. 243).

33) “Bill has talked so much about Juanita.”

— Hillary in spring 1978 to her chauffeur just weeks after Bill had raped Juanita Broaddrick (then Hickey).

34) “I am proud that my husband has stood up as president to confront the violence and to protect American women.”

— Hillary to Joseph Califano who was representing clients and interests averse to her, circa 1970 (Inside: A Public and Private Life, p. 213).

36) “I want to get this sh*t over with and get these damn people out of here.”

38) “Just keep smiling until these a**holes get their pictures.”

— Hillary to campaign manager Paul Fray on the night of Bill’s loss in his 1974 congressional race (The State of a Union, p. 153).

— Hillary and Bill would often call each other these slurs, according to former Arkansas state trooper Larry Patterson (The State of a Union, p. 155).

Here are a few Bill Clinton quotes to balance things out.

— Bill Clinton seeing people at the funeral of a black Arkansas state trooper, according to Larry Patterson on an audiotape interview called More Than Sex, which was produced by Newsmax.

— Bill on Michael Dukakis at the 1988 Democratic convention. He was mad that the Dukakis people had given him a long-winded speech to read (Partners in Power, p. 439).

— Bill telling state trooper Larry Patterson what he would do if anyone brought up any of his sexual affairs. Bill also told Patterson that he liked to “sin at the foot of the cross” (More Than Sex: The Secrets of Bill and Hillary Clinton Revealed! via Newsmax).

— Bill, while hugging Paula Jones in the Rotunda of the Arkansas Capitol (More Than Sex, Larry Patterson).

50) “Larry, I am the governor of the state of Arkansas. I work really hard and the laws that apply to everyone else shouldn’t apply to me.”

51) “I can do any godd**ned thing I want. I’m the president of the United States. I take care of my friends and I f**k with my enemies. That is the way it is.”

— Bill to his staff who challenged him after he said he wanted every member of the Independent Counsel’s office audited by the IRS.

52) “‘Kill’ is what Bill Clinton often said about what he wants to do with his enemies.”

— Bill after he was called a “two-bit” politician during the 1982 Arkansas governor’s campaign (Capitol Hill Blue, April 8, 1999).

54) “I can see your concern. I understand [Barry] Seal was a friend of yours. His death does appear suspicious. And Bobby [William Barr] says you got a feeling somebody here in Arkansas may have had a motive to kill him. But nobody here had anything to do with that. Seal just got too damn big for his britches and that scum basically deserved to die, in my opinion.”

55) “Everyone knows I never wear a condom. They could have heard that anywhere.”

56) “If you cooperate with the media, we will destroy you!”

— Bill to Dolly Kyle Browning. Clinton used Dolly’s brother Walter Kyle to deliver this message. Dolly had been a longtime friend of Bill since they were about twelve years old. They also had been lovers for decades (Perjuries of the Heart, p. 9).

And now for a final word from Miss Emma, the cook at the Arkansas governor’s mansion, referring to Hillary during one of Hillary’s wild cursing fits (Ronald Kessler, Inside the White House, p. 246):

“The devil’s in that woman.”

Read more in The Clinton’s War on Women by Roger Stone.