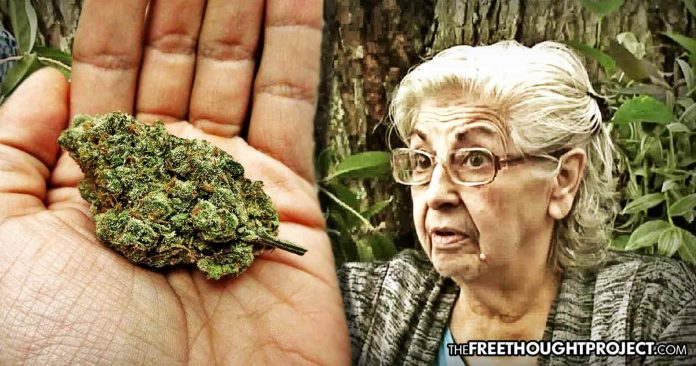 Clare County, Mich. – Delores Saltzman, an 80-year-old grandma was recently arrested because she had an expired medical marijuana card and police found a very small amount of cannabis in her home, about the equivalent of just a few joints.

Last month, Clare County Sheriff’s Deputy Ashley Gruno went by Saltzman home and knocked on the door around 9 pm, in search of the woman’s great-granddaughter, reportedly to return a lost phone and ID. The officer immediately smelled marijuana and began interrogating the poor old woman. Saltzman was honest with the officer and told her that she was a medical patient that allowed her card to expire, and she was arrested on that small technicality.

She was then handcuffed and thrown in a cold jail cell where her arthritis — without the cannabis to help her — began taking its toll.

“That’s ridiculous what they do to people, they don’t need to make you that cold,” Saltzman told FOX 17. “Old Arthur was screaming at me!” she said, referring to her arthritis.

“That’s what I want people to do: don’t be ashamed of something that’s going to help you feel better,” she added.

“I just thought it was absolutely ridiculous to put her through this like that: they could have given her a ticket. And just show us your card later. Reapply for your LARA card, show us this, and then drop the charges,” her son Mark Saltzman said.

Saltzman said that cannabis has saved her life, and helped her with a variety of issues, including appetite, pain, and arthritis.

“[Cannabis] saved my life because I had a bad bleed about four years ago, and Mark took care of me. After I smoke I go down to a one, pain-wise. Before I smoke, I would say I’m an 8 right now,” the 80-year-old grandma explained.

Luckily, this week, a Clare County judge signed an order to dismiss Saltzman’s case, however, she still had to spend a night in jail, which was likely traumatic and could lead to health problems for people with compromised immune systems, which is common at her age.

Showing the callous, cruel, and inhumane nature of the drug warriors, the sheriff had no remorse and was proud to have thrown a grandma in jail.

“What the person was doing was illegal, had she renewed her medical marijuana card she would have been fine. I agree with the action the prosecutors office and allowing the subject to renew her card, thus dismissing the case. The person was illegally in possession of marijuana,” Clare County Sheriff John Wilson said.