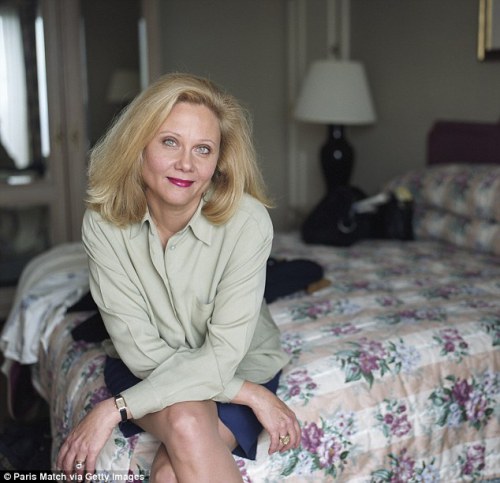 Another long-time “lover” of Bill Clinton has come forth, with a new book, Hillary, The Other Woman (WND Books), spilling beans on his insatiable satyriasis and Hillary’s hell-bent political ambitions.

She is Dolly Kyle, an attorney in her 60s, who first met Bill Clinton in Arkansas in the summer of 1959 when she was 11 years old and he 12. Supposedly, it was love at first sight — a sexual relationship that lasted 32 years — through high school (although she says they didn’t have sex until after graduation), Bill’s law school at Yale, his years as Arkansas governor, and until his entrance into the White House.

This is what Dolly Kyle wrote in her book (source: Daily Mail):

Dolly said she started “sleeping with Bill” after high school and admits “Billy was a sex addict; I was a codependent”. In 1987, Bill Clinton was “undone” by Wilt Chamberlain’s claim to have slept with 20,000 women. Bill told Dolly, “That’s ten times more than I’ve had!” — which meant Bill had sex with 2,000 women in 1987, which means that the number would be even higher by 2016.

Hey, Dolly Kyle, that’s some “love” Bill Clinton had for you!

(2) Bill Clinton had wanted to be president since high school:

Bill first confessed his desire to be president to Dolly back in high school, and began actively pursuing it after the summer of 1963 when, as an Arkansas delegate to Boys Nation, he had a photo-op with President John F Kennedy in the Rose Garden.

Dolly wrote that she frequently had heard Bill refer to blacks in the South as “G**damn n****r”.

(4) Bill Clinton never used a condom, but seemingly was unconcerned because, as he told Dolly, he had a low sperm count. (Note: Other reports say Bill Clinton is sterile from mumps.)

(5) It was a marriage of convenience — of Bill and Hillary using each other:

Hillary’s role was financial provider to get Bill elected president, and pursue “his addictions to politics, power and sex”. Bill’s mother, too, had supported the family financially while his stepfather drank. Dolly wrote: “Hillary’s role of providing financial security for Billy was part of her motivation for the series of financial crimes (yes, crimes) that she committed over the decades. Hillary was upholding her part of the deal to get Billy elected president, after which it would be her turn to be the first woman in the Oval Office.“

Hillary kept Bill’s nose clean in the public mind and had private investigators tracking Bill and the “women he was dating or attacking” because she was riding his coattails to political power. Dolly writes: “Hillary needs the power” and she is ruthless.

(7) Hillary was sweaty and had hairy calves and toes:

Dolly first met Hillary on the evening of May 28, 1974 at the airport in Little Rock. It was election night and Senator William Fulbright was running for re-election. Fulright was Bill Clinton’s champion — giving Bill his first Senate job while Bill attended Georgetown University; supporting him for the Rhodes Scholarship and a teaching job at Arkansas Law School; introducing him to powerful people in Washington and financial backers for Bill’s first congressional campaign that he eventually lost.

Dolly describes Hillary as “a dowdy-looking woman who appeared to be middle-aged” with “thick eyebrows melded together stretching across her forehead,” wearing “coke-bottle-thick lenses” and “a misshapen, brown, dress-like thing that must have been intended to hide her lumpy body. The garment was long, but stopped too soon to hide her fat ankles and her thick calves covered with black hair. Thick brown sandals did nothing to conceal her wide feet and the hair on her toes“.

Hillary glared at Dolly with hostility. Dolly writes: “In that moment, I noticed that the woman emitted an overpowering odor of perspiration and greasy hair. I hoped that I wouldn’t gag when she got in the car.” When Bill introduced the dowdy woman as Hillary, Dolly “was stunned” and thought “it was ‘some kind of a sick joke’ – a woman in a hideous disguise.”

Dolly writes that although the plan had been to go the Fulbright’s campaign headquarters, when the votes came in showing he was losing, Hillary signaled to Bill and the plan was changed. He would head back to the airport. Bill told Dolly, “I don’t want to be seen with a loser.”