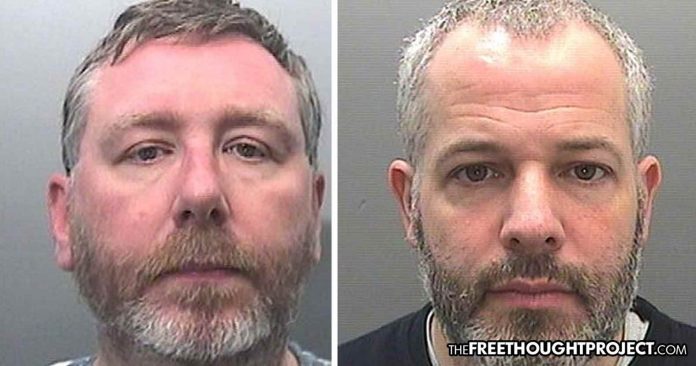 In one of the most disgusting cases ever to come across the radar of the Free Thought Project, a police officer has been sentenced to 16 years in prison after he was caught by his fellow officers—raping a baby.

The now former cop, 48-year-old Dean Roberts filmed himself abusing a helpless infant while on duty. He then distributed the footage to other pedophiles in a messaging app.

His fellow officers caught a different pedophile—also a government employee—who had received the horrifying footage and then traced it back to one of their own.

The former officer from the South Wales police department was then arrested and it was discovered that he had been plotting with other pedophiles to jointly abuse other children to make and distribute more footage.

After his arrest, this vile police officer admitted to rape, sexual assault of a child, possessing and distributing indecent images of children.

“I can never forget the knock on my door and my whole world just falling apart,” the mother of the victim said in court. “It was just like being hit by a bus. We will always have to live with the consequences.”

What’s more, Roberts’ partner in crime was John Guess who happened to also be a state employee. According to reports, Guess was a state attorney who worked for the Welsh government as a legal adviser.

Guess was sentenced to 26 years in prison earlier this month after he was caught abusing two other young girls. According to the court, Guess was also caught taking photos of children as they got changed at swimming pools.

Following the sentencing of Roberts and Guess, Detective Superintendent Wendy Gunney said: “Today’s sentences reflect the gravity of the crimes that have been committed. The two people responsible for the appalling abuse of a number of very young children have now been brought to justice.

“The investigation uncovered extremely disturbing child abuse evidence and the guilty pleas have ensured that the jury were spared from viewing evidence that would have been extremely traumatic.

“Today’s sentence does not mark the end of our investigations and we will work tirelessly to identify any other victims or witnesses and seek the justice they deserve.”

Not one but two state actors have been sentenced to prison for horrifying and unspeakable acts against children including a baby. What’s more, one of these monsters’ jobs was to protect the community from people like himself. Instead of protecting them, however, he betrayed them and preyed upon them. Disgusting indeed.

Sadly, as tragic as this case is, it is not an isolated incident. As TFTP has reported, in 2016, a study exposed the startling fact that police officers are arrested about 1,100 times a year, or roughly three officers charged every day. Many of these arrests are over unspeakable sex crimes.

About one-third of the officers lost their jobs for committing sexual offenses with juveniles.

Another independent study found that sexual misconduct is the second highest of all complaints nationwide against police officers, representing 9.3 percent in 2010, according to a study by the Cato Institute’s National Police Misconduct Reporting Project.

In 2010, 354 of the 618 complaints involved nonconsensual sexual acts, and over half of those involved were minors.

Perhaps the most chilling aspect of police sexual misconduct is the likelihood of under-reporting. As the case of the NYPD cops intimidating the rape victim shows, police officers stand up for their own—even if it means protecting a rapist. When a person becomes a victim of police sex crimes, how can they be expected to go to the very people who employ their abuser and report it — especially given the fact that it is well known police will go to great lengths to protect their own.

“It’s happening probably in every law enforcement agency across the country,” said Chief Bernadette DiPino of the Sarasota Police Department in Florida, who helped study the problem for the International Association of Chiefs of Police. “It’s so underreported and people are scared that if they call and complain about a police officer, they think every other police officer is going to be then out to get them.”