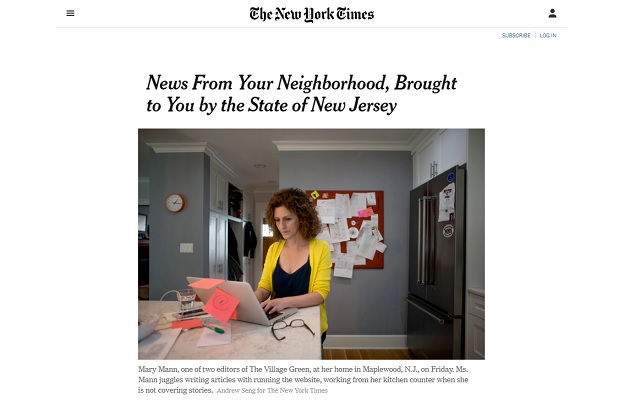 As the New York Times themselves would love nothing more than for the state to step in to secure their financial future, they reported on the plan glowingly.

This is what they want: government-produced fake news: https://t.co/t9nZfwXk35

The state’s lawmakers have embarked on a novel experiment to address a local news crisis: putting up millions of dollars in the state’s most recent budget to pay for community journalism. While public television and radio stations have long received government funds, new media experts like Kelly McBride of the Poynter Institute say they have not heard of any other efforts on this scale, with a state helping to pay for reporting projects among a range of news media, including for-profit outlets.

[…]Journalists and public officials described New Jersey’s undertaking as once unthinkable, raising ethical concerns and stirring fears of government intrusion. Yet there has been little outcry, underscoring for many local journalism’s precarious position and a growing willingness to experiment.

“I think times have changed,” said Louis D. Greenwald, a Democrat and majority leader of the State Assembly. “I think it’s one of the smartest investments that government can make to protect our democracy and our rights.”

The legislation sets aside $5 million from the sale of old public television licenses, creating a nonprofit consortium that would fund reporting projects and bolster civic engagement.

“It’s not about saving journalism in New Jersey,” said Mike Rispoli, state director for the Free Press Action Fund, an advocacy group that was a leading proponent of the legislation. “It’s about making sure our communities are engaged and informed.”

It’s about forcing taxpayers to pay for their fake news propaganda.

The crisis in the news media has been acutely felt in New Jersey, where the press corps covering the state government in Trenton has withered and larger newspapers in the region have reduced their staffs and their coverage.

“We need to do something,” said Joe Amditis, associate director for the Center for Cooperative Media at Montclair State University, one of the schools involved in the effort. “We just can’t sit around and expect it to get better.”

Keep in mind Google has pretty much banned all alternative news sites from their search results on both Google and YouTube, Facebook is banning tons of alternative news sites and just banned Infowars altogether, and Twitter is banning tons of right-wing accounts and artificially suppressing conservative’s reach — yet that’s not enough for these fake news propagandists to compete.

For unspecified "hate speech". They didn't even tell us what the offending posts were.

This sets a chilling precedent for free speech.

To all other conservative news outlets – you are next.

This is election interference on a scale never before seen!