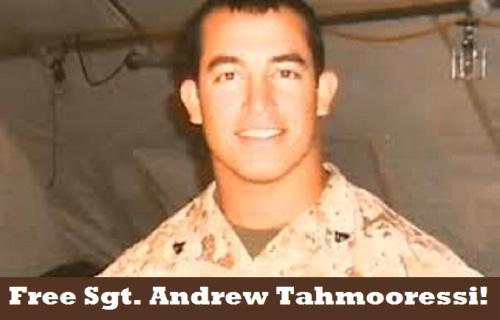 Do you remember Sgt. Andrew Tahmooressi?

He’s the U.S. Marine veteran who has post-traumatic stress disorder after serving two tours of duty in Afghanistan.

On March 31, 2014, Sgt. Tahmooressi was headed to dinner with friends in San Ysidro on California’s border with Mexico, when he missed a freeway exit and mistakenly wound up at a border crossing point in Tijuana. Mexican authorities found three guns inside the truck he had recently driven from Florida to make a new start in San Diego.

Tahmooressi was denied bail and thrown into Tijuana’s La Mesa Penitentiary where, according to his friends, the former Marine was tortured and threatened with rape and death.

On November 31, 2014, after being incarcerated for 214 days, Tahmooressi was released upon a Mexican judge’s order, after a psychiatrist confirmed the Marine was suffering from Post-Traumatic Stress Disorder.

Obama had gone to great lengths, including violating a federal law(Section 1028 of the 2013 National Defense Authorization Act), to free U.S. Army deserter and traitor Bowe Bergdahl from the Taliban, in exchange for the release of five senior Taliban terrorists from Gitmo. At least seven U.S. soldiers had been killed in the fruitless search for deserter Bergdahl. (See “The law that Obama violated in releasing 5 terrorists from Gitmo in exchange for Bowe Bergdahl”)

Bergdahl was court-martialed, but received only a light sentence on November 3, 2017 — of dishonorable discharge, a reduction in rank to private, and a fine $1,000 per month from his pay for ten months, with no prison time. Within hours of the sentencing, President Trump tweeted “The decision on Sergeant Bergdahl is a complete and total disgrace to our Country and to our Military.”

But when it came to an honorable ex-Marine, Andrew Tahmooressi, Obama did not lift even one of his bony fingers to secure the sergeant’s release from his Mexican prison.

Citing an article from The Washington Times, Stephen Frank of the California Political Review writes on Nov. 2, 2014:

Obama would not make a single phone call in eight months to the President of Mexico to get a U.S. Marine from being held hostage by the nation of Mexico. The Commander-In-Chief decided to leave a man behind. If he were an officer in the military he would be court martialed for dereliction of duty.   Barack was so arrogant he never offered an excuse for his lack of action. In the end it took three Republican members of Congress and a former Democrat Governor to get Marine Sgt. Andrew Tahmooressi back from Mexico.

Rep. Dana Rohrabacher (R-Calif.) was one of the three Congressmen. He told The Washington Times that he and Rep. Ed Royce (R-Calif.), Rep. Matt Salmon (R-Arizona), and former New Mexico Gov. Bill Richardson took it upon themselves to fight for Tahmooressi when Obama did not.

Rohrabacher said that while the U.S. Counsel General in Tijuana and members of Congress were mobilized to try to save Tahmooressi, Obama was “AWOL” throughout the process. Rohrabacher said:

“The president, who is also the commander in chief, didn’t do his job. There is a lack of concern for this man, for this American hero who served our country. As commander in chief he showed a total disdain and non-interest in an American hero who served us in Afghanistan and a total disregard for the fact that he was suffering. The president not stepping forward was a slap in the face to veterans. The president didn’t care about it enough to make a simple phone call.”

Here’s the rest of the story.