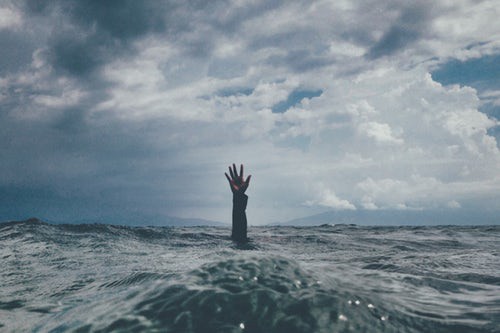 Now, get ready for generational warfare.

Baby Boomers are the generation who were born between 1946 and 1964, which would make them 54 to 72 years old. Until the Millennials, Boomers were the largest demographic cohort, like a bulge in a python. Their numbers gave Boomers enormous power — consumer, socio-cultural and political (via voting).

In an August 1, 2018 article for Medium, “What The Hell Are We Going to Do About The Boomers?,” Bernie Bleske, who calls himself a “teacher”, bewails how the Baby Boomers in his family are getting senile, and that the Boomers are a selfish, parasitic generation who increasingly are a burden on the rest of society.

Note: I found on Rate My Professors a Bernie Bleske who, in 2009, was an English lecturer at Indian River State College in Fort Pierce, Florida. Both his LinkedIn and Facebook page say he teaches English at the American School of Dubai in United Arab Emirates.

Without actually saying so, but by using this pic (below) of a drowning man, Bleske hints at the Eskimo solution for “what to do about the Boomers” — putting the doddering, senile Boomers on ice floes and let them drift out to sea.

Ironically, in a comment, Bleske admits that he himself is a 54-year-old Boomer, but he excludes himself from the sweeping generalizations he makes about Boomers.

Below is his disturbing essay in its entirety:

My relatives are losing their minds. Literally. There’s a mother whose strokes in her hippocampus have left her with no short-term memory. Walk out of the room for 5 minutes and upon return she asks “When did you get here?” The knobs have been removed from her stove so she doesn’t burn the house down forgetting there’s soup on it. An aunt sleeps 18 hours a day, like a cat, and occasionally lapses into a waking dream state in which her long-dead mother is still alive. She still insists on driving her car to the grocery store. There’s a father who lives alone in a huge house, drinks half a liter of rum a day, and regularly calls in the early evening, emotional, drunk, lonely, and with nothing to talk about but stories of his past we’ve all heard a hundred times before. There are older relatives needing constant care from daughters and sons, or tended to in homes that cost upwards of 20 thousand dollars a month. All of them refuse to give up their independence, insist on being attended to, and cling to their life’s wealth as if it’s the only thing saving them from drowning.

They go on living, on and on and on and on, as huge, necessary chunks of their lives — mobility, money, memory — flake and break away, leaving them demanding more and more from the young remaining.

Speaking of money, vast swarms of financial predators large and small circle them. They get daily calls from India about computer protection programs they never purchased, are bombarded with emails promising a return of what they lost or never had — better memory, more money, greater mobility, youthful skin and regular bowel movements and a good night’s sleep. Hair. Sex. The scams get more inventive every week. Last week, my father-in-law received a call from our ‘daughter’. The girl on the phone had all the names down — his, hers, ours — and said she had flown to some midwestern city because her ‘aunt’ had died and now needed money. Unbeknownst to the criminals, we’d just left his house that morning. A friend’s older uncle received a call from a stranger claiming to know his ‘secret’, which would be revealed to the world unless a few thousand dollars worth of Walmart gift cards were purchased and left in some to-be-disclosed location. ‘What secret?” he asked. ‘You know,’ the caller said. “But I don’t!’ he said and they hung up. I’ve deleted thousands and thousands of emails off an aunt’s computer, nearly all of them some sales scam or another; this is the same aunt who’s bought thousands of dollars worth of Iraqi Dinars anticipating millions more when the currency is devalued (or something).

They buy more garbage than China can produce. They fill their carts at the Dollar Store, shove all the crap in overloaded cupboards at home, and then go back for more.

They did great things in their youth, it should be acknowledged. We cannot deny that. The Civil Rights movement. Cleaned up a lot of the environmental mess. Maintained peace. Defeated the Russians. But if they fought the sins and demons their parents never fully conquered — racism, sexism, disease and poverty — they took for granted the foundations THEIR parents laid to make their victories successful. And are now abandoning and squandering them.

They are completing a kind of circle, one in which medical breakthroughs, and wealth, and leisure, and consumer goods, and the information age vastly improve lives at the start, yet somehow makes it tragically worse at the end. For children, 21st century progress makes a life safer, with less threat of disease or hunger or violence than ever in history. It opens their future to hope and possibility. For those at the end, it creates only the illusion of more youth. The 21st century makes a young life better, but it makes an old one worse.

Nothing has prepared us for the Baby Boomer’s return to infancy. We babysit and change diapers and monitor — feed and clean and nurture — infants and children because they are moving forward into life and hope. We care for the elderly because we owe them the dignity at the end.

But what if they don’t care for dignity?

There is, of course, an obligation to care for those who raised us, who had children themselves and helped them into the future. (Ignore for a moment that the generation to follow the Boomers, Gen X, was one of the smallest in American history, and was only grudgingly allowed to keep a fraction of the reward they inherited from their parents.)

Children are a kind of tyrant, one we endure because they are also powerless and need us. But what if the tyrants also have all the power? What if these children insisted they needed no help, thank you very much, and how DARE you take away their ice cream? What if these children had already tasted the pleasures of adulthood, and instead of needing to learn how to manage responsibility and power safely, were no longer capable of managing their power and responsibility at all?

The Boomers are not leaving as adults, with dignity and wisdom and forbearance. They are not accepting the decrepitude of age with courage or honor. Their rage at the dying of the light is a childish, petulant howl. They are Benjamin Buttoning out this world. Clinging to their wealth and insisting on their independence as they grow ever more dependent on those around them, they keep building and buying and voting to meet their own selfish wants as the world withers around them

They were given enormous power (one might even say they were spoiled beyond measure), then they took more power and more reward to feed their ravenous appetites, and now they cannot let it go

We don’t have the foundational philosophy, social structure, or institutions to deal with this huge and unprecedented generation of the elderly. Thousands of years of cultural and social evolution created complex notions of wisdom and honor and respect for the elderly, not to mention time-honored transfers of responsibility and control. In return for their sacrifice to the generations they birthed, those generations honored a filial obligation to see them through to the painful and inevitable end. It is one thing that the Boomers failed to make the personal sacrifices necessary for their children and grandchildren and great-grandchildren’s future; it is quite another that even unto the very last day, they still demand that everyone meet their selfish demands

A lot has been written about the damage the Boomers have done over the decades, (here is a great article) and a lot will continue to be written, but I fear we have yet to grasp the magnitude of the problems that lie ahead as this generation loses ever more of their senses.

The Boomer generation’s youngest member is now 54, and as a group they are 65 million strong, the largest generation in American history. They are the children of the late ’40s, the ’50s, and the early ’60s, who came of age in an era of unprecedented prosperity and hard-earned luxury. No wars, no famines, no economic disasters occured their entire lives. (The hardships they endured pale to what had come before.) The one great threat, the fall of Capitalism to Communism, never happened, never even received a violence they experienced directly. (Like almost everything else in their lives, they exported the violent part of that conflict to Asia and South America and other places where the people weren’t white, even in their own country.)

They grew up with massive infrastructure projects — the US Interstate highway system, the power grid, and the water supply — were all completed while they were still young. THEIR parents were forged in a time that saw 2 World Wars, a Great Depression, and pandemic disease; a generation who vowed that their children, the Boomers, would never suffer as they had. Hardened like steel by their experiences, the Great Generation succeeded. Universities were state funded. The government was greatly expanded to include Medicaid and Social Security. Peace was built through diplomacy and American dollars. The environment was protected. Parks were built and waterways cleaned.

So, what have the Boomers done as they have aged?

Well, for one, they elected Trump. (And also Reagan, and also Clinton.) Before that, they put their own in charge of every State Government and Federal Agency they could, and promptly began turning to entire system towards their personal needs. By the 1980s, they were the largest voting demographic in America, precisely when income inequality began to rise. By 2007, The 1% increased their wealth by 278%, while those in the middle, the working class, saw a mere 35% increase.

They took full advantage of state-funded Universities, and then when they no longer needed education, they shifted all financial burden to students themselves, increasing college costs by over 600% since 1980, and slashing public school budgets.