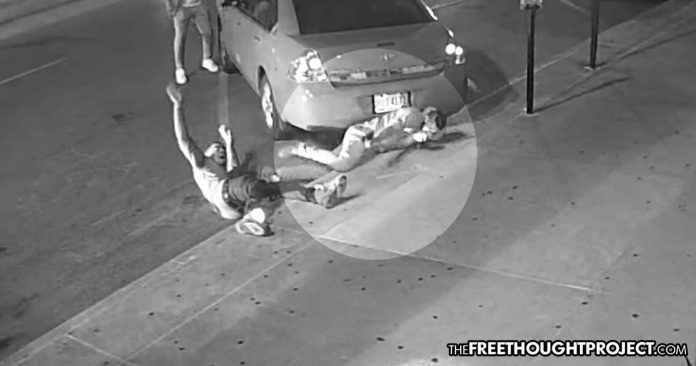 Akron, OH — Surveillance footage from outside of an Akron nightclub last year has just been released showing the moment Jamon Pruiett picked up a licensed handgun and fired it at some who just shot at him. Pruiett was later arrested for the shooting because the person he shot back at was a cop.

Now, however, nearly a year after the shooting, Pruiett has been acquitted for the felony charge of shooting at an officer.

According to police, an officer opened fire on Pruiett and his brother Latrent Redrick outside of the Zar nightclub because they were threatening patrons and officers with a gun.

“You just don’t shoot someone four times in the back with a gun in their side,” says Terry Gilbert, who represents Latrent Redrick. “I think that this officer violated every protocol as to the justification of use of force.”

As WKYC reports, on the night of the shooting, Redrick says he and his brother were leaving a party near the Zar nightclub, where a fight had broke out. He says as they were leaving, some guys were taunting them, which led him to show the men the gun in his waistband. Redrick has a license to carry and received his permit for the gun a month before the shooting.

Moments after showing his legal gun, Redrick explains that someone began shooting from behind them. Fearing that they were about to be murdered by an unknown assailant, Redrick’s brother Pruiett picked up the gun and shot back in an act of self-defense.

Once Pruiett realized it was a cop, he dropped the gun and surrendered but he’d already been shot several times.

No officers were hurt during the shooting yet Pruiett and Redrick were both hospitalized for severe injuries sustained from the gunshots.

“This how my book end,” Redrick said “This is how my story end. I thought it was over.”

As WKYC reports, when he was shot only three words went through Redrick’s mind. “This is it,” he said, thinking he was going to die, “this is it.”

Redrick and Pruiett spent weeks in the hospital and were both charged with felonies. As the brothers fought to live, they also had to fight for their freedom.

Redrick was acquitted two weeks ago and Pruiett was acquitted earlier this week. Now, they are pushing for the officer—who opened fire on them for no reason, nearly killing them—to be held accountable.

“This guy was out of control and committed a horrible act,” Gilbert said. “It’s on video. It’s unjustified. And it’s now ten months and there’s been no accountability as far as the actions he took.”

WKYC reports that the officer involved was placed on administrative leave for three weeks. He’s currently being investigated by the Summit County Prosecutor’s Office.

The Akron police chief is upset that the brothers were acquitted and released a statement this week disagreeing with the verdict in Pruiett’s trial.

“We disagree with the verdict in this case and believe the evidence, which shows the defendant picking up and firing a handgun in the direction of an officer, supports a conviction,” chief Kenneth Ball said in a statement.

Gilbert pointed out the lack of punishment for the officer involved and noted how the only people the police attempted to prosecute in this case were the actual victims.

“It’s kind of troubling that the authorities have done nothing in 10 months only to go after the victims,” Gilbert said.

“Just because you black with a gun does not mean you are a thug,” Redrick said. “Because me or my brother has never been charged.”