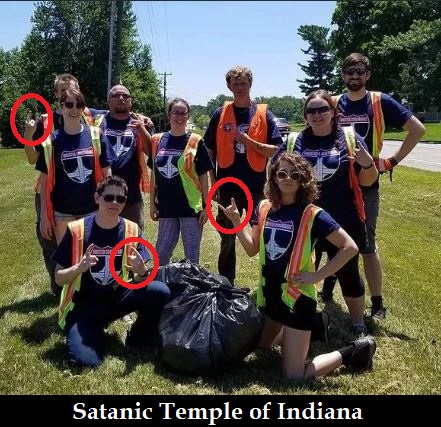 The Oxford Dictionaries defines “norm” as something that is usual, typical, or standard. To “normalize” some deviant thing or behavior, therefore, is to make that object or behavior a “norm” — that is, making it acceptable by having the public perceive it as usual, typical, standard, and humdrum ordinary.

America has already surrendered to sodomy and “transgenderism” (a biological impossibility). What is underway now is the normalization of evil — of deviant predilection and behaviors like pedophilia, bestiality, cannibalism, and satanism. See:

This post is about the continuing efforts to normalize satanism and satanists via:

America already has public satanic statues and monuments in Detroit, Michigan, in a veterans park in Belle Plaine, MN, and in a park in Boca Raton, Florida, installed by a public school teacher no less.

Now, a long planned-for statue of Satan will be installed right next to a Ten Commandments monument on the capitol grounds of Little Rock, Arkansas.

Last year, tens of thousands of people signed a petition asking the Arkansas state government to reject an application by the Satanic Temple to install a statue of Satan in the state capitol — to no avail.

Now comes news that the demon statue is set to be unveiled next Thursday, August 16, 2018.

There’s a petition asking the Arkansas state government to reject the statue. The petition will be hand delivered to:

Another way to normalize satanism is for satanic groups to present themselves as just another “ordinary” civic group.

To that end, the Satanic Temple of Indiana has adopted a stretch of U.S. 421 for cleanup.

Fox 59 reports, July 9, 2018, that the Satanic Temple Indiana has completed their first highway cleanup project as part of  its “Inverted Crossroads” campaign.

The satanists adopted a stretch of US 421 and they are required to complete at least four cleanings throughout the year. Their portion of US 421 begins at US 32 and runs south for two miles. As part of the highway cleanup program, a sign will go up promoting the Satanic group.

Damien Blackmoor, the co-head of Satanic Temple’s chapter in Indiana, said: “The cleaning initiative is a great way to get our chapter members involved while giving back to the state. We’re all very excited for this campaign.”

Two Gun Suppressor Bills Introduced In Senate: One For-The Other Against
April 17th, 2021 The Lid

Slowly But Surely, The Truth Is Coming Out

CNN told producers to lie and fearmonger about Covid-19 deaths for...