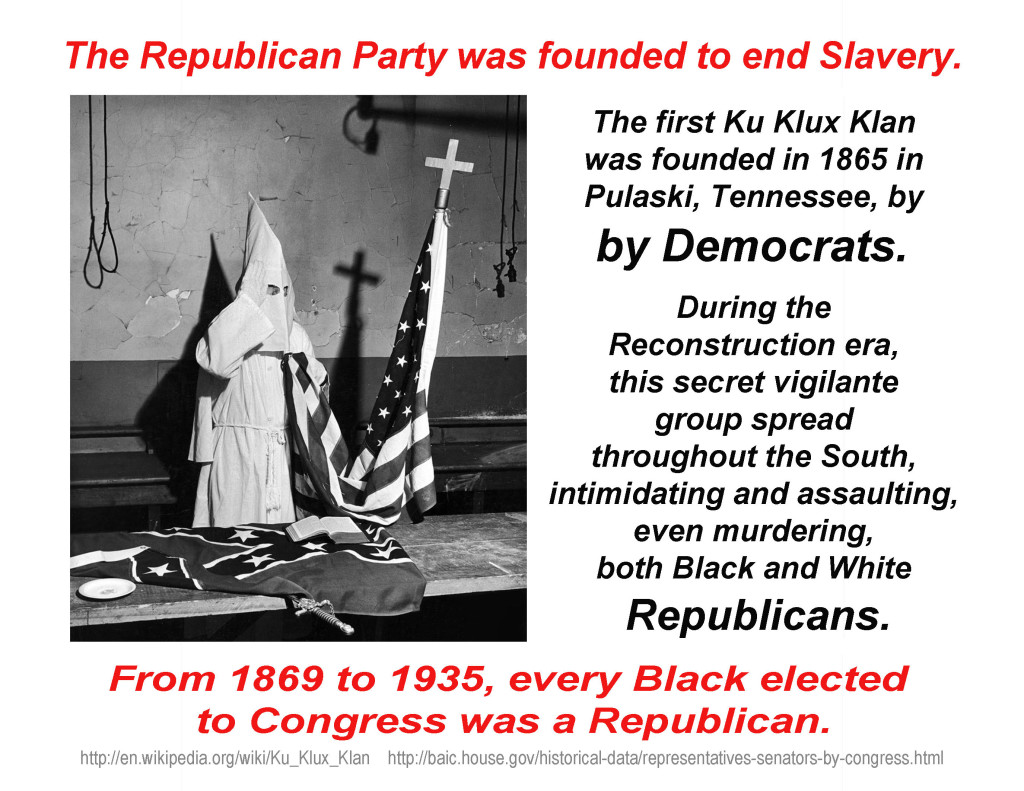 The Liberal Democrats take credit for civil rights and blame Republicans for obstructing these rights among minorities. But their claim is a lie. In fact, Democrats fought against any form of civil rights for minorities and only conceded when they knew that their obstructionism would fail. History proves without question that Republicans have consistently fought racism while Democrats proved that they were racists.

In 1954, the United States Supreme Court handed down a landmark decision known as Brown v. Board of Education. This decision overturned a prior decision from 1896, known as Plessy v. Ferguson, which enabled states to establish schools that segregated black students from white students on the basis of what was known as the “separate but equal doctrine” under already established Jim Crow Laws. Brown v. Board of Education effectively put an end to Jim Crow laws as they applied to public education. It outlawed school segregation and declared that “separate but equal” policies in public schools, were a violation of the Equal Protection Clause of the US Constitution’s Fourteenth Amendment. Plessy v. Ferguson enshrined the principle that, in our free America, black students had the legal right to attend schools side-by- side with white students. It led the way to more sweeping civil rights legislation which came years later.

Democrats constantly remind us that they have always been champions of civil rights and equality among races. But, the truth proves otherwise. The fact is that the Plessy v. Ferguson decision was made by a Republican led Supreme Court, in which Earl Warren was Chief Justice, and was supported, encouraged and enthusiastically enforced by a Republican President, Dwight D. Eisenhower, who had appointed Warren. It is hailed as perhaps the most important domestic political event in one of the most highly praised and most consequential periods of American 20th Century history. But the incontrovertible truth is that Democrats despised Brown v. Board of Education and did all they could to obstruct, and to reinstitute Jim Crow laws which had made second-class citizens of black Americans. Their vehicle for this disgraceful affront to freedom was known as The Southern Manifesto. It claimed that the Supreme Court had abused its power and promised to use all lawful means to bring about the reversal of the decision and to prevent the government (i.e., President Eisenhower) from implementing it. The Southern Manifesto was drafted and presented by 99 members of both houses of Congress, of whom two were Republicans and 97 were Democrats.

Obstruction to freedom and civil rights for black people was nothing new for the Democrats. The KKK was largely populated by Southern Democrats. Ralph Byrd famously admitted he had belonged to the KKK and was curiously praised for using the term “white nigger” on a television interview. Lyndon Johnson, who has gone down in the Democrats’ revisionist history as the white knight of Civil Rights, was known to have used the N-word freely to describe black people and, according to Kevin Jackson’s splendidly vivid article, Civil Wrongs: Lyndon Johnson, favored enacting Civil Rights legislation only to placate “uppity negroes” and “… to give them a little something, just enough to quiet them down, not enough to make a difference.” This “little something” started with welfare legislation that he thought would favor blacks “just enough” to grab them as a permanent voting bloc for Democrats.

Well, it may have gotten the Democrats black votes, but in the decades since the days of Lyndon Johnson’s Great Society, Democrat policies, with the aid of liberal Republicans, have led the so-called black community to untold social instability, generational welfare and indigence, disintegration of families, illegitimacy, and astonishing rates of crime and imprisonment among black men that has led them away from prosperity, their families and responsible behavior in the community. It has also led many black people to segregate themselves from whites according to attitude. Through the words and deeds of Jesse Jackson, Al Sharpton, Louis Farrakhan, Eric Holder and Barack Obama, to name only a few of the race-baiters among us, black people have too often been encouraged to develop and expect racist attitudes toward and from white people.

None of this was part of the dream spoken of in 1963 by Dr. Martin Luther King, Jr. King’s dream was that black people would be free to work and achieve according to their ethics and honesty and to take their place as free people side by side with people of all races. In fact, under King’s sane leadership, black people were already on the way to achieving freedom from past injustices, and were experiencing prosperity and growth. But, remember that Martin Luther King Jr. was a Republican, who had opposed the unfair treatment of black people by Democrats. One wonders if this is the real reason he was murdered.