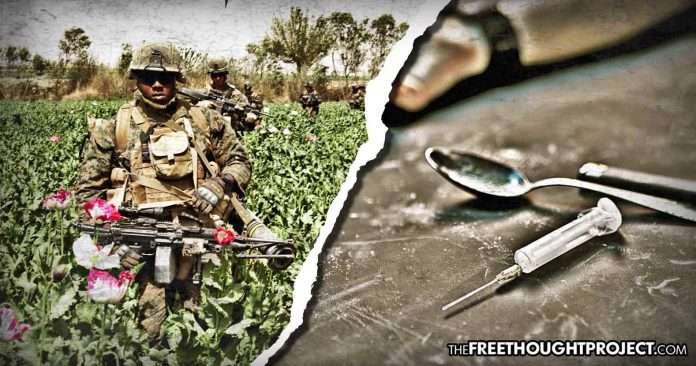 As the longest war in United States history approaches yet another anniversary, the U.S. is being forced to admit that after pouring billions of dollars into “counternarcotics efforts” in Afghanistan, the result has been an overwhelming increase in opium production.

The recent report from the Special Inspector General for Afghanistan Reconstruction (SIGAR) reveals that U.S. taxpayers spent $8.62 billion in Afghanistan between 2002 and 2017—solely on combatting poppy cultivation and drug production. The result was an absolute failure, and the report confirmed that “Afghanistan remains the world’s largest opium producer, and opium poppy is the country’s largest cash crop.”

“SIGAR’s analysis revealed that no counternarcotics program led to lasting reductions in poppy cultivation or opium production. Eradication efforts had no lasting impact, and eradication was not consistently conducted in the same geographic locations as development assistance. Alternative-development programs were often too short-term, failed to provide sustainable alternatives to poppy, and sometimes even contributed to poppy production.”

The report also claimed that “the Afghan drug trade has undermined reconstruction and security, including by financing insurgent groups and fueling government corruption.”

The reality is that if the $8.62 billion the U.S. has spent on countering drug production and trade in Afghanistan has actually helped it immensely, then the U.S. is literally undermining the “reconstruction” efforts it claims to have spent the last 17 years pursuing.

Ironically, before the U.S. invaded Afghanistan in 2001, poppy cultivation was actually at a low. Now, as the war rages on with no end in sight, production has reached an all-time high.

According to a report from the United Nations Office on Drugs and Crime and Afghanistan’s Ministry of Counter Narcotics, published in November 2017, the “area under opium poppy cultivation increased by 63% since 2016, reaching a new record high.”

As a result of the increase, the UN report acknowledged, “The significant levels of opium poppy cultivation and illicit trafficking of opiates will probably further fuel instability, insurgency and increase funding to terrorist groups in Afghanistan. More high quality, low-cost heroin will reach consumer markets across the world, with increased consumption and related harms as a likely consequence.”

The record-setting poppy cultivation levels just happened to coincide with a significant increase in United States troops stationed in Afghanistan. U.S. troops have been caught guarding the plants, fueling the belief that the U.S. government cares more about controlling a major cash crop than it does about “defeating terrorism”—neither of which the U.S. has any business trying to control.

The impact of U.S. intervention has been staggering—for both American and Afghani civilians. Under supervision from the U.S., Afghanistan is now responsible for producing 90 percent of the world’s opium supply, and the massive increase in production has fueled an on-going opioid crisis in the United States that has ensnared more than 2.5 million Americans in heroin addiction.

As whistleblower and former FBI contractor Sibel Edmonds noted, before the U.S. invaded Afghanistan in 2001, there were around 189,000 heroin users in the United States. By 2016, that figure increased to 4.5 million—an estimated 2.5 million heroin addicts and 2 million casual users.

The number of heroin overdose deaths in the U.S. also skyrocketed with a 533 percent increase from around 2,000 deaths in 2002 to more than 13,200 deaths in 2016. The is part of more than 64,000 deaths attributed to drug overdoses in 2016, according to the National Institute on Drug Abuse.

The idea that the Afghanistan War has any kind of “humanitarian” purpose can be debunked just by looking at the current results and how much civilians have suffered from enduring the effects of years of U.S. intervention.

The United Nations Assistance Mission in Afghanistan began documenting civilian casualties in 2009. The combined number of civilians who were killed and injured that year was nearly 6,000. The number has steadily increased over the years, and in 2016, it reached a record high with nearly 3,500 killed and nearly 8,000 injured.

The latest report from SIGAR clearly states after 15 years “no counternarcotics program led to lasting reductions in poppy cultivation or opium production.” Instead, U.S. efforts have actually contributed to opium production and made the problem worse.

The report claims that “improved security, governance, and economic growth” are needed to make a lasting difference, which means that after spending more than $1 trillion, the government still believes throwing money at the problem is what is needed to solve it.

When will Americans realize that it is finally time to bring the troops home and to declare an end to the Afghanistan War?

This Kamala Harris tweet about the border did not age well
April 18th, 2021 Liberty Unyielding