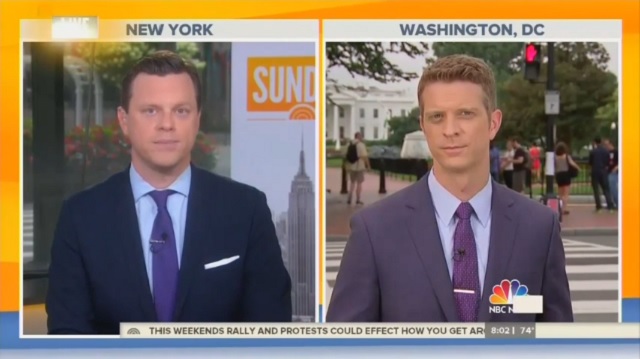 NBC News has ignored the story of their own reporter and news crew being attacked in the streets of Charlottesville by Antifa marchers on Saturday.

On the one-year anniversary of the deadly Charlottesville protests, white supremacists and radical leftists known as Antifa descended on the Virginia town once more to commit more violence. Late Saturday night, NBC News reporter Cal Perry and his crew were in the thick of it as Antifa members ganged up on them and attacked. The next morning, NBC’s Sunday Today ignored the attack and suggested the media was simply “heckled” by their assaulters.

On Twitter, Perry was documenting the protesters as they marched through the streets of college town when they started to get “very aggressive with the media” and trying to block their camera shots. “Yeah. We’re getting a lot of this. Protesters trying to grab our camera,” he responded to one Twitter commenter telling him to “f**k off national media vulture.”

Things got super-heated when one Antifa protestor shouted “F**k you, snitch a** news b**ch. F**k you” and tried to either pull the camera away from the person using it or knock it to the ground. It was unclear in the video.

Despite the video evidence on the ground from their own reporter, NBC went to Garrett Haake who was at the White House in anticipation of violence there as another white supremacist rally was set to be held. “Overnight, tense moments in the streets of Charlottesville, Virginia, far left protesters heckling the mediaand chanting anti-police slogans,” he suggested at the top of his report. They actually used footage Perry and his crew shot but didn’t show anything from their attack.

The assault on NBC’s reporter came almost a year since their political director, Chuck Todd used his MSNBC program, MTP Daily to elevate Antifa’s violence as a legitimate tactic against the right. He even doubled down and allowed them to use the formerly prestigious Meet the Press as a platform to push their hate and violent methods. Todd has never condemned them.

Todd appeared on Sunday Today and had nothing to say about the attack or Antifa, which had been declared a domestic terrorism group by the State of New Jersey before he had them on last year. Instead of condemning Antifa, he lambasted the President for criticizing anthem protesters and targeted his supporters as racists.

The media has been saying for weeks now that Trump’s “dangerous” (see: entirely accurate) statements about how they’re “the enemy of the people” is going to get their fake news reporters attacked.

Some 100 newspapers are planning to write editorials attacking Trump on August 16 over this very subject:

In a "coordinated response" to President Trump's escalating "enemy of the people" rhetoric, more than 100 newspapers will publish editorials on Aug 16 “on the dangers of the administration's assault on the press.” @brianstelter @BostonGlobe #pressfreedomhttps://t.co/FV07UAT80T

Here their own reporters got attacked by rabid leftists and they completely ignored it!

No truer words have ever been spoken than President Donald J. Trump saying the media “is the enemy of the people!”