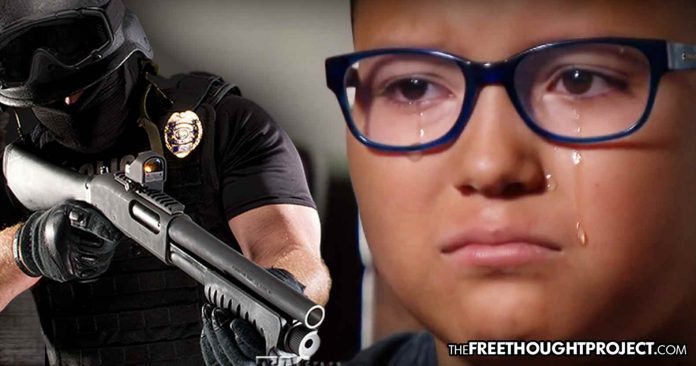 Chicago, IL — Two little boys who used to look up to police have been traumatized and their view of police tarnished after a SWAT team burst into their home at night and held the entire family at gunpoint, including the children. The family was innocent and the raid was on the wrong home.

All too often, police raid the wrong home. Whether it’s due to the wrong address on the warrant, faulty GPS, or just blatant carelessness, the results are the same. Innocent people are traumatized, assaulted, beaten, or even killed. A Chicago family has just found this out the hard way.

Peter Mendez, 9, was eating dinner with his family earlier this month when multiple cops with the Chicago police department kicked in his door and raided their home with guns drawn. Peter, his little brother, and his mother and father were all held at gunpoint.

Peter is now suffering from trauma stemming from the incident and relives the nightmare every day.

After police kicked in the door and held the kids at gunpoint, their father, Gilbert Mendez was thrown to the floor and handcuffed. The entire time, Peter thought they were going to kill him.

Police then separated the kids from the parents as they cried out in horror.

“I could hear my babies screaming, ‘Don’t shoot my dad. Don’t kill my dad. Leave my dad alone. What did my dad do?’” Mendez said.

For 90 minutes, the children were separated from their dad who was face down on the floor in handcuffs, accused of a crime he did not commit because cops had raided the wrong home.

Adding to the unscrupulous nature of a raid on the wrong home, the Chicago police department claimed that there was no documentation of the raid. However, Dave Savini with CBS 2, found the documents and reported on them Tuesday, noting that the cops were at the wrong home.

Adding to the unscrupulous nature of a raid on the wrong home, the Chicago police department claimed that there was no documentation of the raid. However, Dave Savini with CBS 2, found the documents and reported on them Tuesday, noting that the cops were at the wrong home.

“I think the Chicago Police Department needs to be held accountable. They came in and they tore our home up. They tore our lives upside down, and we’ve never been the same,” Peter’s mother said.

Now, Peter and his little brother Jack will likely have to seek counseling to treat their trauma from the incident. Peter’s family is now planning to sue the city over the raid on their home.

“It made me feel like the police weren’t what I thought they were,” Peter said.

For those who may think this may be an isolated incident, consider the story of Davianna Simmons, who the Free Thought Project reported on in June.

Davianna’s family was just awarded $2.5 million after cops — also conducting a raid on the wrong home — held her and her family at gunpoint when she was just 3-years-old.

The lawsuit stems from a search warrant carried out in the home of Aretha Simmons in 2013. During the raid, according to the lawsuit, the entire family was severely abused and the 3-year-old suffered severe mental trauma — labeled by an expert as “one of the worst cases of child PTSD” he’s seen.

On August 29, 2013, Chicago police executed a search warrant at an inner-city Chicago home in hopes of finding a drug dealer. Cops barged in the home of 3-year-old Davianna Simmons where she lived with her grandparents’ and mother Aretha Simmons. An officer pointed and held a loaded gun at point-blank range to the chest of 3-year-old Davianna.

During the raid, according to the lawsuit, not only did Simmons allege that police threatened her small daughter with a gun, but she said the girl saw police violently shake and strike Simmons and point a gun at the head of the girl’s grandmother.

Sadly, until the department and the officers themselves are held accountable for such flagrant incompetence, the taxpayers will continue to pay for their mistakes.