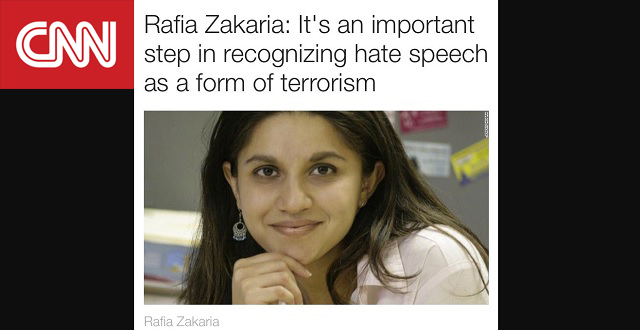 According to CNN opinion contributor Rafia Zakaria, the banning of Alex Jones and Infowars was the first step towards criminalizing “hate speech” as “a form of terrorism.”

From CNN, “Rafia Zakaria: It’s an important step in recognizing hate speech as a form of terrorism”:

The stripping of InfoWars from Facebook, Apple and other platforms is an important step in the recognition of nativist, nationalist and white supremacist hate speech as a form of terrorism.

In the aftermath of the decision of various service providers to stop carrying InfoWars content, there are many who will say that this represents an unprecedented affront to free speech and First Amendment rights. As a Muslim-American who has seen the detestable anti-Muslim propaganda of InfoWars content replicated across the worldwide web and popularized via Apple, Spotify and others, I know nothing could be farther from the truth.

The United States denies First Amendment protections to those sharing views involving support for or agreement with foreign terror organizations. In the case of Ali Shukri Amin, the Virginia teenager who was charged with providing material support for terrorism based on his tweets and blog, a US Federal Court declared that First Amendment protections do not apply to those who are being charged under the Material Support for Terrorism statute.

For the record, Alex Jones and Infowars has consistently opposed all the Neocons’ wars in the Middle East for around two decades. CNN has pushed every last one of them.

On April 5, 2017, just two days before Trump carried out an airstrike on Syria, CNN headlined this sickening war propaganda:

CNN has child blatantly read off a script in push for war to overthrow Assad, calls it a "7-year-old Syrian girl's heartbreaking plea." pic.twitter.com/bmk6PjsoHn

Of course, none of that matters to Rafia Zakaria (relationship unclear), whose work revolves around apologia for Islamic terrorism.

Sadly, domestic terrorism, or Jones’ dangerous speech, in which he claims that he is in a holy war against Islam, is not prosecuted under that statute. This is a failing that has permitted the proliferation of platforms such as InfoWars, their presence on popular platforms a legitimization of sorts for their content.

This new decision is a step forward in recognizing that hate outlets, such as InfoWars, are complicit in domestic terror, and a relief to Muslim-Americans, like myself, who have been the target of online assaults and threats.

Rafia Zakaria is the author of “The Upstairs Wife: An Intimate History of Pakistan” (Beacon 2015) and “Veil” (Bloomsbury 2017). She is a columnist for Dawn newspaper in Pakistan and The Baffler.