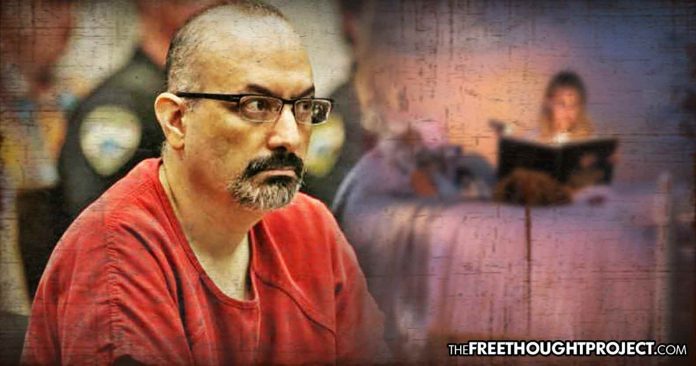 Seattle, WA — In case after horrifying case, those in positions of power are exposed for their crimes, showing how these positions often attract society’s worse. One recent example of this is a police sergeant in Seattle being found guilty this year for the repeated rape and molestation of his own daughters.

According to the court documents, this vile top cop routinely raped his older daughter, known in court papers as A.B., about five times a week and also molested his younger daughter, C.A.

During sentencing Amador claimed to have protected and cared for his daughters and he deserved a light sentence.

“But you failed to take care of me because the biggest threat to my safety turned out to be you,” said his daughter in reply.

The abuse took place for more than a decade and the little girls were unable to tell anyone as their father was a cop. Both of the victims, now ages 24 and 19, described their horrifying childhood in which A.B. was Amador’s favorite one to rape while C.A. was regularly belittled.

According to Seattle Pi, A.B. testified to undergoing regular “pinnings,” which involved Amador holding her down in his bed and talking with her extensively while either touching private body parts or raping her.

“I wasn’t allowed to have secrets from him,” A.B. testified June 5.

According to A.B. the rapes began when she was just 9 years old and persisted even after she had gone away to college.

According to C.A., she testified that the “pinnings” were more of a punishment for her. This vile individual would lie on top of her and grope her while they were sometimes partially or fully naked.

On multiple occasions, Amador would force C.A. to leave the room, then he would move the dresser in front of the door to his bedroom while A.B. was locked inside. He would abuse A.B. in his bedroom—for hours.

Showing the power police have to sweep things under the rug, in 2013, a cousin of the girls called CPS to report C.A. because she began cutting herself around the age of 12 as a result of the “pinnings” and years of abuse.

However, Amador was able to escape any accountability and told his family that if anyone found out about him raping them, they could lose everything they had if he was fired from being a cop.

A.B. hadn’t told anyone about being raped as Amador had instilled so much fear in his own children that they were terrified of what might happen if anyone found out. During this time, Amador was being promoted within the department and used this to threaten his children even more.

“If I helped keep CPS away, it would help keep us together,” A.B. said of that time, and keep them away they did. As Amador was an upstanding member of the Seattle Police Department, the claims against him were likely written off as they “must have been fabricated by some anti-police nut job.”

Once she finally left the house and the control of her sadistic and horrifyingly abusive father, A.B. realized that remaining silent was not something she should continue to do. During that time, Amador had divorced the girls’ mother and remarried. Knowing that Amador’s new wife was pregnant with a baby girl, A.B. realized she had to say something to save her half-sister from a lifetime of abuse.

In March of 2016, A.B. and C.A. came forward with their accusations. In a wise decision, they went to a neighboring police department to do so. As TFTP has reported on numerous occasions, often times, police departments will protect their own, even if they are abusive animals like Amador.

In April of 2016, the Lake Forest Park Police Department arrested him. Likely due to his massive salary as a sergeant, Amador posted the $750,000 bail and quietly resigned from the police department after 21 years with them—likely keeping his taxpayer funded pension in the process.

During this time, Amador was allowed supervised visitation with his new daughter but was not allowed to visit the ones he’d abused for years.

On Friday, justice was finally served and this monster was sentenced to 280 months in a cage where he belongs.