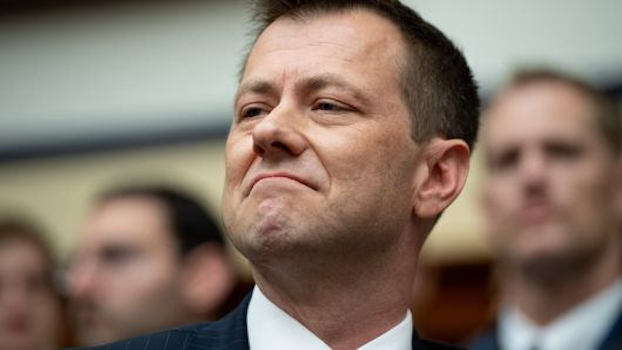 FBI Special Agent Peter Strzok was fired by the bureau on Friday over a series of controversial anti-Trump text messages which Peter Strzok and his former lover Lisa Page had exchanged during the run-up to the 2016 presidential election.

However, the press has failed to report that Strzok was an agent for both the FBI and CIA at the same time.

That’s right, not only was Strzok employed by the FBI until his abrupt public departure from the bureau on Monday, Strzok has been sheep-dipped by the CIA where he currently remains employed to this day. (i.e. Strzok’s termination from the FBI on Monday was nothing more than a dog and pony show as Strzok remains an integral member of the deep state)

As I originally reported in mid-July, a sheep-dipped Peter Strzok worked for both the FBI and CIA at the time.

Hello! People! This is big!

Both the FBI and CIA have played the American people for fools by not disclosing the fact that Peter Strzok is a double agent of the U.S. government and has been sheep-dipped by the CIA.

A sheep-dipped Peter Strzok has been covertly operating as the Section Chief of the Central Intelligence Agency’s Counterespionage Group during his secret 24 year tenure with the agency while masquerading as Deputy Assistant Director of the Federal Bureau of Investigation’s Counterintelligence Division where he was in charge of investigating Hillary Clinton’s use of a personal email server along with the investigation into Russian interference in the 2016 United States elections.

The bombshell information published first on BrassBalls.blog reveals that the “joint CIA/FBI position was created by Congress in 1996” which allowed Strzok to hold both posts.

An unclassified document printed on FBI letterhead dated January 20, 2016, which contains the subject line “Supplemental Classification Review and Determination” was addressed to the Bureau of National Security’s Assistant Secretary Gregory B. Starr from Peter Strzok who is listed as “Section Chief” of the “Counterespionage Section” in reference to Strzok’s CIA post. Keep in mind, this is not an FBI post as Strzok’s position at the FBI is “Deputy Assistant Director Counterintelligence Division” not “Section Chief” which is a CIA post.

You can read the full document here:

November 18, 1996, Joint CIA-FBI Press Release on Arrest of Harold James Nicholson reveals “an unprecedented level of cooperation between the CIA and the FBI.”

The CIA and FBI have implemented a number of reforms and new procedures at the CIA that are designed to detect the slightest of early warning signs of espionage. As a direct result of these reforms, anomalies were detected that ultimately led to the identification of Nicholson and his alleged espionage activities. These reforms include:

The new revelations explain Strzok’s recent performance in front of the Special Counsel in which the sheep-dipped agent mocked the American people by smirking and acting like a fool.

Strzok was a 22 year veteran of the FBI who was in charge of the Russian interference investigation prior to the 2016 election.