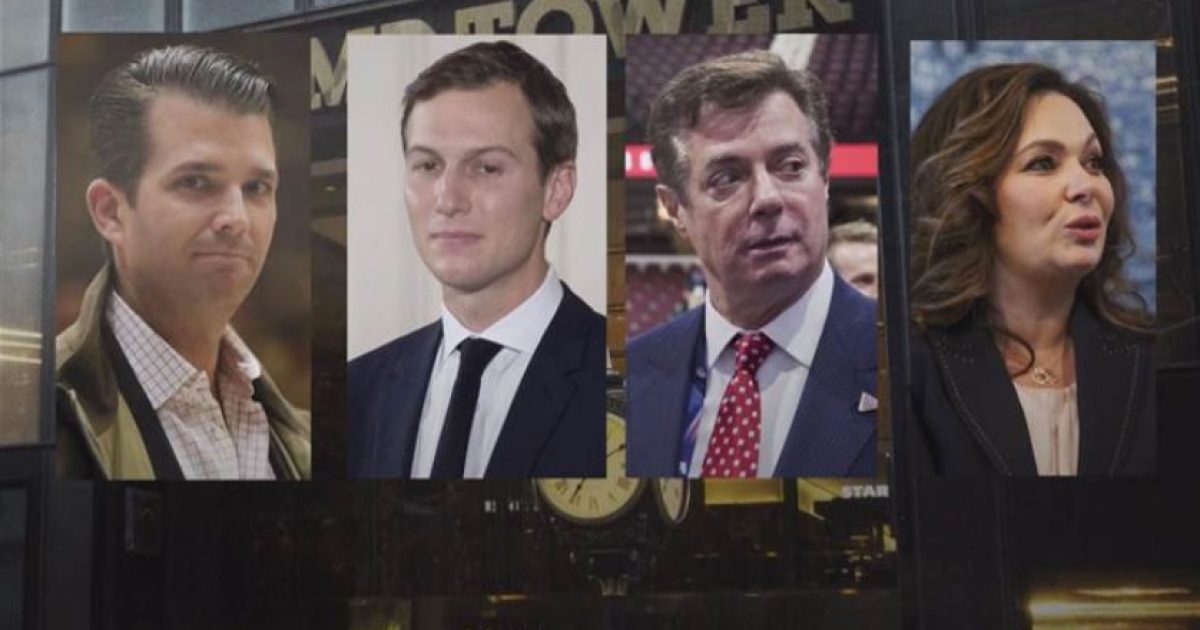 Lee Smith of “Real Clear Investigations” (RCI) says it’s looking more likely that the “real Russian collusion may have taken place among those who arranged the meeting rather than the Trump officials who agreed to attend it.”

(Note: Bruce Ohr’s position at the DOJ was unrelated to any of this. Prior to his demotion, he was the Director of Organized Crime Drug Enforcement Task Force.)

Russian lawyer, Natalia Veselnitskaya, has been a Fusion GPS client since 2014.

Veselnitskaya hired Fusion GPS to represent Pyotr Katsyv and his son Denis, both Kremlin-tied businessmen, in her campaign to repeal U.S. legislation sanctioning Russian officials under the 2012 Magnitsky Act, which was named for Sergei Magnitsky, a Russian corruption whistleblower who died in police custody. Simpson, sources told RealClearInvestigations, was tasked with running a smear campaign against the driving force behind those sanctions, Chicago-born financier William Browder, who had employed Magnitsky.

Glenn Simpson has testified that he had dinner with Veselnitskaya the night before the June 9, 2016 Trump Tower meeting and the night after.

Glenn Simpson testified that he had only heard about the meeting one year later, which seems highly unlikely for several reasons.

First, we are being asked to believe that he and Veselnitskaya never discussed the meeting over dinner on either the night before or after the meeting. I will quote Hillary Clinton here. This requires a “willful suspension of disbelief.”

Next, RCI’s Lee Smith believes Simpson was lying because Veselnitskaya “has publicly stated that she used talking points developed by Simpson for the Russian government in that discussion. Kremlin officials also posted the allegations on the Prosecutor General’s website, and shared them with visiting U.S. congressional delegations.”

The theory that the meeting may have been a set-up also makes sense because it so conveniently, too conveniently, corroborates one of the key allegations in the dossier, a point Simpson made sure he made in his testimony before Congress.

That allegation read “Trump and his inner circle have accepted a regular flow of intelligence from the Kremlin, including on his Democratic and other political rivals.”

Attending the Trump Tower meeting with Veselnitskaya was:

“Russian-American lobbyist Rinat Akhmetshin, who had served in the Soviet Union’s military counterintelligence service. His role remains unclear, but evidence suggests he may have been the source Simpson was alluding to in December 2016 when Ohr recorded that Simpson told him, “Much of the collection about the Trump campaign ties to Russia comes from a former Russian intelligence officer (? not entirely clear) who lives in the U.S.”

How The Meeting Was Arranged

On June 3, he emailed Donald Trump Jr. with an offer originating in a meeting in the office of the prosecutor general—Veslenitskaya’s point of contact with the Kremlin.

Goldstone promised “official documents and information that would incriminate Hillary and her dealings with Russia and would be very useful to your father.”

Trump Jr. promptly responded: “If it’s what you say I love it.”

The specificity of the phrasing in Goldstone’s email appears designed to establish the case for collusion:

“This is obviously very high level and sensitive information but is part of Russia and its government’s support for Mr. Trump.”

Even more curious than the wording of Goldstone’s email is the role he played in arranging the meeting. Goldstone, who has kept a low profile since news of the meeting broke in July 2017, testified before Congress that he now regrets his part in it.

According to the dossier, Trump himself as well as aides Paul Manafort and Carter Page were in clandestine contact with the Russian government. “If that was really the case,” former FBI agent Mark Wauck told RealClearInvestigtions, “it’s not clear why the Russian government needed a British music publicist to make an overture. And why would Moscow need to send a Russian lawyer who didn’t speak English to Trump Tower? That tends to confirm that the meeting was intended as a setup.”

Veselnitskaya turned the meeting into a discussion of William Browder, who had employed Magnitsky. When Trump Jr. saw Veselnitskaya’s real reason for setting up the meeting, he ended it quickly.

But if this were a sting operation, engineered by Simpson, with likely assistance from Justice Department officials he is now known to have been in regular contact with, the damage had already been done.

“The purpose of the meeting,” one congressional investigator told RCI, “was to substantiate the Clinton-funded dossier alleging that Trump was taking dirt on his rivals from the Russians.”

Was This Meeting a Setup?

Once we learned that the FBI tried to spy on the Trump campaign through operative Stefan Halper in May, it does not require a stretch of the imagination to believe Trump Jr. might have been played.

I’m not saying Trump, Jr. was naïve, but at the time he was approached by Rob Goldstone, he was relatively new to politics. He was a businessman, not a politician. As I’ve argued repeatedly, who could resist the opportunity to hear incriminating information about a political opponent?

There are so many other reasons to believe this was one more action from their massive campaign to bring down Donald Trump.

Yes, I find Lee Smith’s theory to be entirely believable and I hope that Congress can find proof of it prior to the midterms.

Biden To Reporter: Are There Republicans Who Think We’re Sucking The Blood Out Of Kids? (Video)
Conservative Firing Line