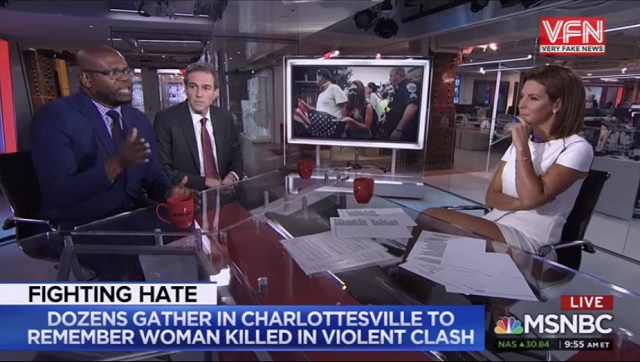 [On] MSNBC Live with Stephanie Ruhle, the show took the time to discuss reports of left-wing protesters attacking journalists and harassing police officers over the weekend, leading Johnson to rationalize Antifa hostility to police officers:

There were a lot of activists who were, like: “Why are you in riot gear? We don’t see no riot here.” There is a belief — I’m not saying it’s always correct — but there is a belief by many activists, including Antifa, that the police tacitly support this kind of violence.

When host Ruhle injected to ask if they believe police “are there to protect white nationalists,” Johnson continued:

When you look at how the police respond to white nationalists as opposed to Black Lives Matter protesters, yes, you do. When you consider the number of police departments where people have been caught with white nationalist tattoos and the emails and everything else like that that’s there.

Look, I never like the idea of journalists getting attacked, but no one has a reason to believe — even when you look at how the police responded last year — when you look at the fact that they shut down the Metro in D.C. to let these guys go in, people have reason to doubt the police’s dedication to eradicating racism.

After MSNBC contributor Bret Stephens then injected, “Yeah, but thuggishness is thuggishness, wherever it comes from politically, and we should be the first to call it out,” Johnson responded: “I disagree.”

Host Ruhle was mostly speechless as she concluded the show.

It’s rather interesting Johnson thinks the job of police is not to enforce the law but to “eradicate racism.”

It really gives you an idea of the type of future world he wants to create.