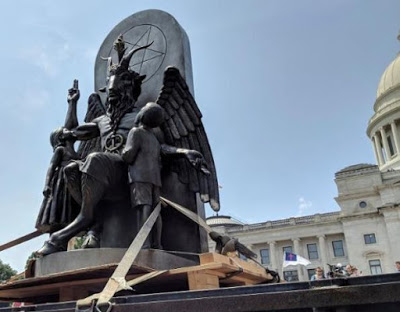 Despite a petition organized by Return to Order signed by 59,000 of Americans to Arkansas’ governor, Asa Hutchinson (R), and state government, a 8½-ft. tall statue of the Devil (in the form of Baphomet, the goat-headed demon), with two smiling children at its side, was unveiled yesterday in front of the Arkansas State Capitol building in Little Rock.

A lesser-known petition on Change.org had only 114 supporters. 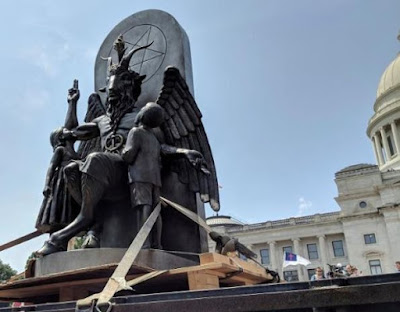 The AP reports that Satanic Temple unveiled the Baphomet statue during a First Amendment rally at the Arkansas State Capitol to protest a Ten Commandments monument already on the Capitol grounds.

The Satanic Temple said the Ten Commandments monument violates constitutional freedom of religion rights and that installation of their statue will demonstrate religious tolerance. Satanic Arkansas cofounder Ivy Forrester, who helped organize the rally, said “if you’re going to have one religious monument up then it should be open to others, and if you don’t agree with that then let’s just not have any at all.”

The statue of Baphomet, who is seated and accompanied by two smiling children, can’t be installed under a 2017 law that requires legislative sponsorship for consideration of any monument. Satanic Temple has said it will sue the state, claiming religious discrimination. But when the Satanic Temple tried to join a case the ACLU had already brought against Arkansas, the ACLU asked the court to bar the intervention. A judge has not yet ruled whether the Satanic Temple can join the case.