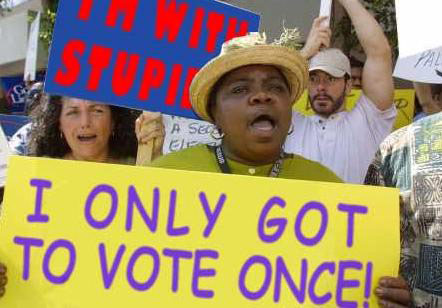 All signs are pointing to massive vote fraud by the Democrats this November.

In just one congressional district (the 12th) in Ohio, as many as 170 registered voters are either dead or fakes because they are all over 116 years old. (Breitbart)

As reported by Ross Kecseg of Empower Texans, those stunning facts were revealed yesterday by Direct Action Texas (DAT), a watchdog organization known for exposing mail ballot fraud in Texas.

DAT is joined by two other citizens’ groups, Grassroots America: We the People (GAWTP) and Texas Conservative Grassroots Coalition, in a letter to Republican Gov. Greg Abbott, who ostensibly had made election integrity a priority, asking Abbott to direct the Secretary of State to verify the citizenship of persons registered to vote in Texas, and notify local county registrars of their findings. The letter reads:

“Unfortunately, Texans continue to see headlines of non-citizens voting in our elections. In Tarrant County, Rosa Ortega, a legal resident, non-citizen, had been voting for 10 years before being caught and convicted. In Beaumont, an El Salvadoran was indicted on multiple federal charges for having voted in the 2016 Presidential election…In a recent interview Starr County District Attorney Omar Escobar confirmed that non-U.S. citizens are on the voter lists in his county. He is quoted stating, ‘That non-citizens are registered to vote is beyond question. That non-citizens are voting in Starr County is also beyond question.’ They are registered and voting, the only remaining question is, how many.”

Public Interest Legal Foundation, a public interest law firm dedicated to election integrity, has documented non-citizens registered and voting in several states, including Texas, and is suing Harris County in federal court for refusing access to public records of non-citizens found on the county’s voter rolls.

State Sen. Don Huffines (R–Dallas) has committed to file legislation that would force the Secretary of State to verify citizenship of all registered voters. Similar legislation had previously been filed by outgoing State Sen. Van Taylor (R–Plano), but Republicans didn’t move the bill.

Meanwhile, Democrat House Minority Leader Nancy Pelosi brazenly tells her fellow Democrats to “do whatever they have to do” to win the upcoming mid-term elections.

Pelosi appeared on MSNBC’s “AM Joy” on Sunday, August 12, with guest host Jonathan Capehart, a Washington Post columnist, for a wide-ranging discussion during which she lashed out at a supposed media conspiracy to undermine her leadership.

“The Republicans are spending millions, tens of millions of dollars against me because they’re afraid of me, because I outrace them in the political arena, I outsmart them at the negotiating table, and because I’m a woman.”