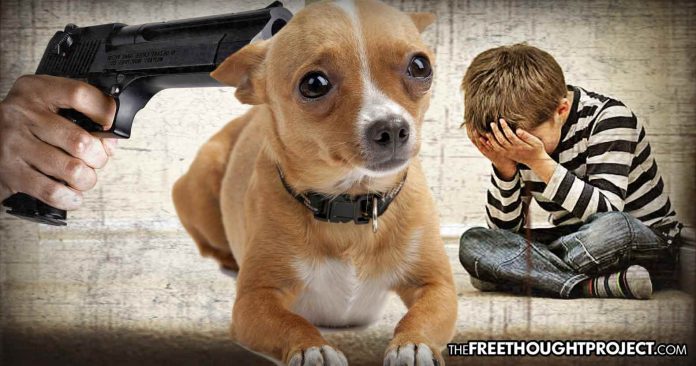 San Bernardino, CA — Once again, a cop’s fear of a dog has put others in harm’s way, and, once again, an innocent person was hurt. This time, an 11-year-old boy was struck by a police officer’s bullet when the officer was attempting to kill his dog.

This week, a deputy from the San Bernardino County Sheriff’s Department was responding to a call over a possible disturbance at a home. When the deputy knocked on the door, the 11-year-old boy answered and—like most dogs in the world do when they hear a knock at the door—his pup ran out.

Instead of doing what any postal worker, pizza delivery driver, or UPS driver would do—by solving the situation without a gun—the cop pulled out his service weapon and attempted to kill the boy’s dog. Luckily, for the dog, the cop is a terrible shot. However, the boy was not so lucky.

While the bullet only grazed the dog’s paw, it then hit the little boy.

“The dog sustained a graze wound to a paw and his side,” a statement from the sheriff’s department read. “The bullet then ricocheted off of the cement of the front porch and stucco of the house, and a fragment grazed the 11-year-old boy on the outside of his left leg.”

Naturally, the sheriff’s department claimed that the dog “charged” the officer and he had no other choice but to open fire in the direction of a small child to avoid any potential of getting bit—or licked.

After shooting the boy and the dog, emergency personnel were called to the home and the boy was treated for the bullet wound to his leg.

It was reported that the dog was taken to a nearby veterinarian and will also make a full recovery. The sheriff’s deputy was uninjured.

According to the Daily Press:

Investigators from the Sheriff’s Department Specialized Investigations Division were requested and are conducting the investigation. Officials said updates will be provided as additional information is available for release.

Anyone with information related to this investigation is urged to contact Detective Floyd Stone of the Specialized Investigations Division Homicide Detail at 909-387-3589. Persons wishing to remain anonymous can contact the We-Tip Hotline at 1-800-782-7463 or online at www.wetip.com.

Officials with the sheriff’s department have not said whether or not the deputy who shot the child and the dog has been placed on suspension.

Sadly, cops shooting at dogs and hitting kids is not an isolated incident.

Earlier this year, a cop was fired after he shot a little girl inside her own home while trying to kill her dog. Showing that they are willing to hold their own accountable, the officer was charged with felony aggravated battery in March.

In January, Officer Dexter Betts was placed on administrative leave after discharging his firearm inside a family’s home—in the cowardly attempt to kill a dog.

Body camera video of the incident showed Betts and his partner approach the house with flashlights and enter through the front door. When they enter the house, several children are seen in the living room watching television.

Betts checks the hallway and then returns to the living room where he becomes frightened by the family’s medium sized English bull terrier named Chevy.

Then, with careless disregard for the children in the room, Betts puts the lives of multiple innocent people in danger to shoot at a dog who just barked at him.

“Ow! Ow! Ow, you hurt my eye! Ow! Ow!” the girl begins to yell immediately. Her screams are absolutely heartbreaking.

Luckily, the 11-year-old boy, and the girl in the video below both escaped with their lives. Autumn Steele, who was shot and killed by a cop who tried to kill her dog, was not so lucky.

The Unmasking of General Mark Milley
The Black Sphere

Will The Jewish Establishment Finally Debate Its Critics?
The Lid

5G rollout must be stopped to avoid widespread exposure to EMF...

WATER WARS are about to erupt in America as dwindling supplies...