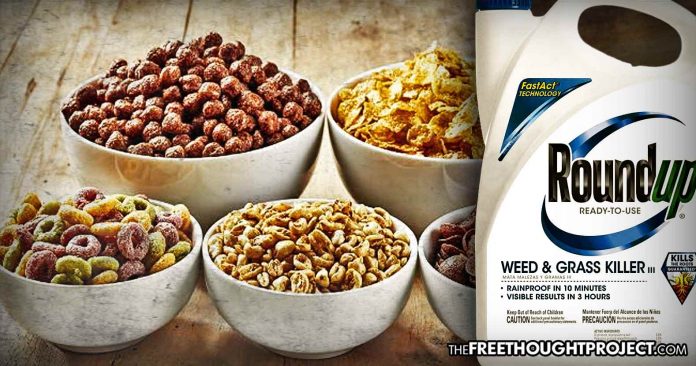 According to a new study conducted by the non-profit Environmental Working Group (EWG), a large number of consumer products, including children’s cereal, contain the carcinogen Glyphosate.

Glyphosate is, of course, the chemical that was recently found to cause cancer and other health problems. Glyphosate is the main ingredient in Monsanto’s herbicide Roundup, which has been slowly getting banned all over the world this year.

The study reported that 31 out of 45 of the products that were tested contained levels of the chemical that are potentially unsafe. These products ranged from snack foods and granola bars to children’s cereal.

Some of the companies named in the study have responded to the accusations, claiming that their products may contain Glyphosate, but not enough to actually cause any harm.

General Mills, the company behind many of the cereals tested in the study, issued the following statement in response:

Our products are safe and without question they meet regulatory safety levels. The EPA has researched this issue and has set rules that we follow as do farmers who grow crops including wheat and oats. We continue to work closely with farmers, our suppliers and conservation organizations to minimize the use of pesticides on the crops and ingredients we use in our foods.

Quaker, who was also named in the study, had this to say:

We proudly stand by the safety and quality of our Quaker products. Producing healthy, wholesome food is Quaker’s number one priority, and we’ve been doing that for more than 140 years.

Quaker does not add glyphosate during any part of the milling process. Glyphosate is commonly used by farmers across the industry who apply it pre-harvest. Once the oats are transported to us, we put them through our rigorous process that thoroughly cleanses them (de-hulled, cleaned, roasted and flaked).

Any levels of glyphosate that may remain are significantly below any regulatory limits and well within compliance of the safety standards set by the Environmental Protection Agency (EPA) and the European Food Safety Authority (EFSA) as safe for human consumption.

Quaker continually evaluates our product portfolio to ensure the highest quality and safety standards for our consumers. While our products comply with all safety and regulatory requirements, we are happy to be part of the discussion and are interested in collaborating with industry peers, regulators and other interested parties on glyphosate.

Monsanto even issued a statement of their own, telling CBS that “glyphosate does not cause cancer” and “has a more than 40-year history of safe use.”

The statement went on to say that, “even at the highest level reported… an adult would have to eat 118 pounds of the food item every day for the rest of their life in order to reach the EPA’s limit” for glyphosate residues.

It may be very true that the researchers who conducted the study were using a lower threshold than the EPA does to determine the toxicity, but scientists disagree about what the safe level actually is, with many thinking that the official standard is dangerously high.

Furthermore, the EPA has been caught tampering with these threshold levels in pesticides before.

In 2013, as a fresh wave of studies showing the dangers of the chemical were being released, the EPA actually raised the accepted levels.

A 2015 report from the Chicago Tribune revealed that the EPA intentionally obfuscated data and changed their own standards so they could allow an unsafe chemical made by DOW to get an acceptable rating. After the EPA approved the chemical, a number of environmental groups including the Center for Food Safety and Earthjustice quickly sued the agency, forcing them to retract their approval several months later.

When the EPA finally reversed their decision in 2015, they claimed that “new information” surfaced to make them change their minds, however, according to the Tribune’s report and the accusations of many activists, the EPA knew all along and were colluding with DOW to approve a substance that was proven to be harmful.

The chemical in question was a new herbicide that combined 2,4-D and glyphosate.

According to the Tribune’s report,

EPA now says it is safe to allow 41 times more 2,4-D into the American diet [than previously allowed for decades]. To reach that conclusion . . . the agency’s scientists changed their analysis of a pivotal rat study by Dow, tossing aside signs of kidney trouble that Dow researchers said were caused by 2,4-D.

The report went on to describe how the EPA received test results from DOW that proved their product was below the EPA’s standards, so they tampered with the study so it would pass.

As The Free Thought Project reported last week, a landmark case against Monsanto’s Roundup weedkiller concluded in San Francisco in which a jury awarded $289 million in damages to a former school groundskeeper, Dewayne Johnson, concluding that Roundup gave him terminal cancer.