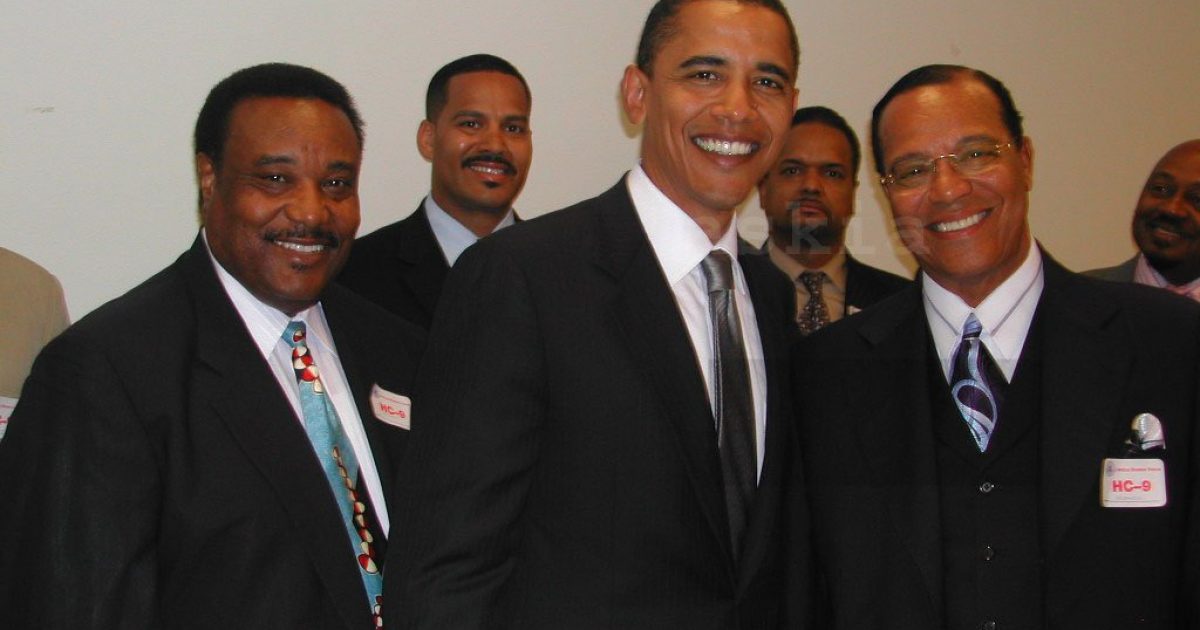 Even though the media admits that Omarosa has less credibility than a drunken sailor on shore leave, it keeps buzzing about the existence of a Trump “N Word” tape.

Does it exist? Doesn’t it exist? Will it change anything?

Obama’s own equivalent of the “N Word” tape was released after his time in office. It was a photo of him posing with Louis Farrakhan, the racist and anti-Semitic leader of the Nation of Islam. Farrakhan had praised Hitler and was the head of a hate group that believes white people are devils, created by genetic engineering, who will be wiped out.

News photographer kept this 2005 photo of Obama & Nation of Islam leader Louis Farrakhan secret for Obama's entire political career because it would have “made a difference” to Obama’s political future. pic.twitter.com/zLIgp9WZrR

That’s a whole lot worse than a racial slur. (Obama’s mentor Jeremiah Wright, whose black nationalist church the Obamas had attended, used his own racial slurs during services.)

The photo was released. And the media embargoed it. A handful of publications mentioned it.

To this date, no reporter has directly asked Obama about it.

There have been a thousand times as many news stories about the hypothetical existence of a Trump “N Word” tape as there are about the real and verified existence of the Obama-Farrakhan photo.

(Never mind the Obama – Khalidi tape which the Los Angeles Times is still keeping under lock and key.)

The same mainstream media publications obsessed with Trump tapes either failed to report on it or put up “explainers” trying to contextualize it and justify it after it had gone viral. That’s what the New York Times did. Instead of covering the photo, it wrote an explainer, “Why Louis Farrakhan Is Back in the News.” CNN was shamed by Jake Tapper into covering it. The Washington Post still appears not to have covered it. Democracy dies in darkness indeed.

So if such a tape exists, frankly who cares? The left’s double standards in public life ended with Trump. It can either abide by a single standard or its fake pious outcries will be met with ridicule and contempt.

Obama ran a racist administration, whose DOJ cultivated race riots and which protected a racist black nationalist hate group’s voter intimidation. Obama frequently met with Al Sharpton, a racist responsible for an anti-Semitic pogrom. He was caught in a photo with Louis Farrakhan, a man that even many on the left acknowledge is a racist. (They just refuse to condemn the Women’s March leaders who support him.) The media doesn’t care. The left doesn’t care. That’s a choice that they made to uphold a double standard on racism. But they can’t expect anyone else to abide by it.

The day that the media actually calls out Obama on the Farrakhan photo is the day we can have a conversation about racism. Until that day happens, Obama’s pass doesn’t just apply to him.

We can have a single standard or no standard. But we cannot and will not have double standards that exempt the left from the mores and laws that it claims to hold sacroscant.