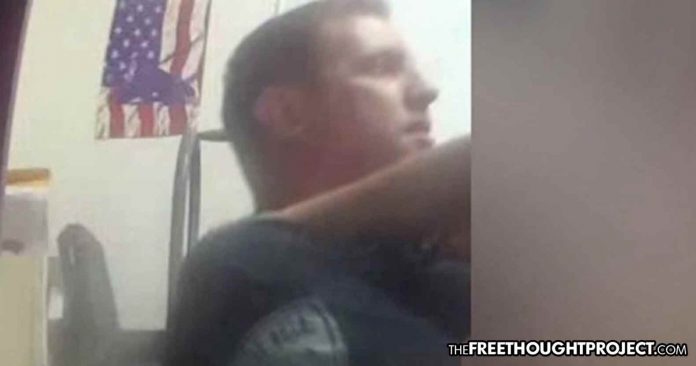 Superior, AZ — This week, an Arizona police sergeant has been fired after body camera footage captured him having sex in his office. In the video, former Superior Police Sergeant Anthony Doran can be seen positioning the body camera and pointing it himself and his partner as she sits on his lap. During the investigation into the video, other questionable images were found in his possession.

The allegations only came to light after Doran and three other officers were sued in an excessive force case. Otherwise, the public would have never known.

While having consensual sex on duty is far better than killing people—which cops do and keep their jobs for on a regular basis—some of the content found on Doran’s computer have raised some serious concerns.

According to police, they found a myriad of pornographic material, including the body cam video which was saved to a folder on Doran’s work computer on his desktop, titled “Fun Time.” The folder contained 36GB of additional sexually explicit material.

According to police, the folder was rife with pornography but also contained some very concerning images of a naked little girl.

According to the report, a detective concluded the investigation saying images of the girl could not be “classified as child exploitation, however, they would be classified as erotica, could be indicative of grooming behaviors.”

The images were of Doran’s own daughter. It is entirely possible for Doran to have had naked images of his young children on his PC as many parents likely do in scenarios where they are taking bubble baths or other activities. However, the fact that these pictures were in a folder—filled with Doran’s homemade porn—raises some serious eyebrows.

Nevertheless, Doran was not charged with any crime and the Pinal County Attorney’s Office wrote it off without incident.

According to KTVK however, the Arizona Peace Officer Standards and Training Board (AZPOST), which oversees the standards and integrity of police departments in Arizona, says there is a pending case against Doran, but it has not yet been presented to the board for charging.

Doran was fired in April for the images and the sex but the details of the firing were kept under wraps, in spite of him being a public figure in a position of authority.

Doran is what the Free Thought Project refers to as a gypsy cop as he was fired for a similar offense in 2013 only to relocate and get hired on with a new department.

As AZ Central reports, in 2013, the Pima County Sheriff’s Office terminated Doran for fondling a woman in his patrol car while on duty, then trying to delete explicit evidence of the tryst from his cellphone. The state officer standards agency suspended his certification for it, too.

However, the Superior department had no problem looking the other way and below is the result of such irresponsible hiring.