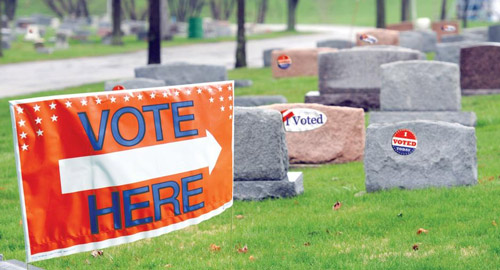 In an interview with USA Watchdog‘s Greg Hunter, author Eric Eggers says that he has evidence that Democrats are planning to cheat in the 2018 midterm elections. “I think there is clear evidence that they [Democrats] are actively working to create an environment that makes cheating as possible and as likely as it can be,” said Eggers during the interview.

Eggers is the author of the new book called “Fraud: How the Left Plans to Steal the Next Election.” You can view the interview with Hunter in its entirety below.  In the video, Eggers lays out the available evidence that not only have Democrats cheated to win elections in the past, they intend to cheat again, and soon.

“We have 248 counties in this country that have more registered voters than they have citizens of legal voting age. How does that happen? There are clearly errors on the voter rolls. This is why the subtitle of the book is ‘How the Left Plans to Steal the Next Election’ because what I uncover in the book is George Soros and the head of the Democrat Party both support the effort to do two things. On one hand, they fight any effort to increase the legality and security of elections in this country. They do that by fighting state efforts to institute voter ID laws or to cleanse the voter rolls of illegal voters. That’s documented and not up for dispute. The State of Ohio just successfully fought George Soros to do both those things. They also fund groups like La Raza and ACORN, and they have had to change their names because they are chronically associated with voter fraud allegations. So, those guys go out and get as many voters as possible, regardless of whether they should be casting votes in this country. Then they funnel them through the gaps that exist in our vulnerable election system. That’s basically the setup.” -Eric Eggers

Eggers says he’s got a mountain of evidence to back up the claims in his book and those made in this interview with Hunter. “I think it’s certainly increasingly difficult for Democrats to make the claim there is no evidence of voter fraud. In this book, we had 40 pages of footnotes . . . so, there is quite a bit of evidence,” Eggers said. “As recent events have shown, it doesn’t take voter fraud on [a] massive or national level for it to truly impact elections. . . . In the 2016 election, we found 2,100 incidents of double voting in the state of Florida alone.”

But Eggers feels that even though Democrats plan to cheat in an attempt to steal the election, there’s one big problem with their plan.  And that was the election of president Donald Trump.

“The good news is we do have a president like President Trump that is laser-focused on the issue, and he is informing quite a few people. . . . The sanctity and security of our elections is absolutely a national security issue.” -Eric Eggers