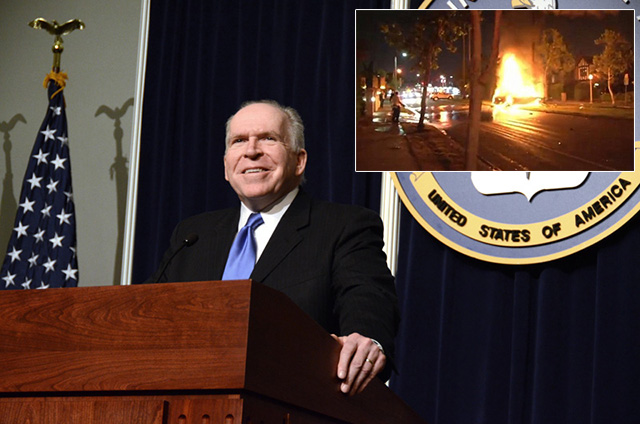 It’s worth taking a second look at this article from 2013 now that former CIA director John Brennan is in the headlines attacking President Trump for trying to “silence” him.

From The Daily Mail on 15 August 2013, “Renowned investigative journalist Michael Hastings was working on story about CIA Chief John Brennan at the time of his mysterious death”:

The mysterious death of famed investigative journalist Michael Hastings took a surprising turn this week when it was revealed that the target of his latest expose was CIA Director John Brennan.

Hastings was killed in a fiery car crash in the Hancock Park neighborhood of Los Angeles about 4:25 a.m. on June 18, of this year. Witnesses described his speeding Mercedes coup as creating sparks and flames before it fish-tailed into a palm tree and exploded. Hastings’ body was burned beyond recognition.

Earlier that day, Hastings had sent an email to his editor at the website Buzzfeed alerting him that ‘the Feds are interviewing my “close friends and associates.” Perhaps if the authorities arrive “BuzzFeed GQ,” er HQ, may be wise to immediately request legal counsel before any conversations or interviews about our news-gathering practices or related journalism issues.’

He added that ‘Also: I’m onto a big story, and need to go off the radat for a bit.’

The big story he was working now appears to be about spy chief Brennan, who has been described in secret emails from the President of CIA contractor Stratfor, Fred Burton – and released by Wikileaks -as being on a ‘witch hunt’ of investigative journalists.

Hastings’ wife, Elise Jordan, revealed on Piers Morgan’s show on CNN earlier this month that the story Hastings was working on at the time of his death was about Brennan. The CIA confirmed Jordan’s claim to San Diego 6 News, which says that when they brought the information – as well as a leaked email from Stratfor – to Brennan’s spokesperson, he responded ‘with lightning speed.’

Reporter Kimberly Dvorak says she received two emails from the CIA spokesman, one acknowledging that Hastings was working on a story about the CIA, and another stating that ‘without commenting on information disseminated by WikiLeaks, any suggestion that Director Brennan has ever attempted to infringe on constitutionally-protected press freedoms is offensive and baseless.’