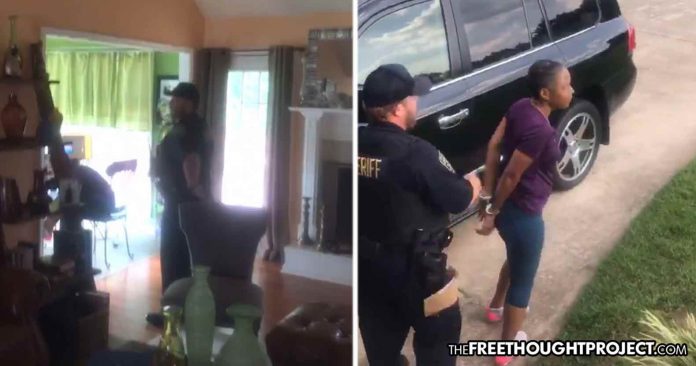 Clayton County, GA — In the land of the free, practicing democracy is often futile and even more often, highly corrupt. Illustrating the corrupt nature of this process is a case out of Georgia in which a sheriff with a history of alleged criminal activity is accused of harassing, intimidating, and even arresting innocent people who challenge his authority.

On August 10, Robert Hawes, a former deputy with the Clayton County sheriff’s department, announced that he would be running against the incumbent Sheriff Victor Hill. Days later police would be in his home, kidnapping his wife.

“This sounds like an effort to intimidate a potential political opponent, which is in my mind, not an appropriate use of law enforcement powers,” Harvey Newman, professor emeritus at the Andrew Young School of Policy Studies at Georgia State University told AJC. “We want people to feel able to speak truth to power. But this appears to be an effort to, if not silence that, to at least intimidate it.”

After Hawes announced his desires to seek Hill’s job, Hawes says that’s when Hill went on the offensive, sending out emails disparaged Hawes’ sons, accusing them of stealing their father’s department-issued gun in 2014 and selling it at a pawn shop. Hawes said the accusation is untrue.

“I bet you if we did an open records request of the emails that came from the sheriff, there would be some nasty threats from him,” he said. “The only reason he is doing what he is doing is because I said I was running for sheriff.”

When they heard of the false claims, Gerrian Hawes, Robert’s wife, emailed the sheriff and said, “Where there is love, fear cannot exist.”

For this, deputies were sent to their home to arrest Gerrian for making threats to the sheriff.

“All this comes after I made the announcement I was running for sheriff,” Robert said. “She responded because she thinks he is trying to place fear into us.”

As the AJC reports, Hill has an extremely corrupt and checkered past:

Hill has been the leader of the Clayton Sheriff’s Office since 2013, his second go-round in the top job after running the department from 2005-2008. When the seat was up for re-election in 2016, he received 63 percent of the vote in the Democratic primary.

Over the years, however, detractors have described his behavior as everything from reckless to criminal.

When he first took office in 2005, he immediately fired 27 employees, placing snipers on the sheriff’s department roof as they were escorted out. In 2012, he was accused of several counts of racketeering, theft by taking and making false statements, though he would later be acquitted of all charges.

In 2015, he accidentally shot a female friend while demonstrating “police tactics” during a date. And last year, his law enforcement certification was put on probation for two years by the Georgia Peace Officer Standards and Training Council.

This year, he has been linked to Mitzi Bickers, a Clayton Sheriff’s chaplain who was indicted in April in connection to the bribery scandal at Atlanta City Hall. Charges against her include witness tampering, wire fraud and money laundering.

Rodney Williams, a former Clayton Sheriff’s Office chaplain, experienced a similar fate to Gerrian after he emailed the sheriff, noting his “evil agenda.”

After the email, Hill took out a warrant for Williams’ arrest as well. Williams told AJC that he could predict Gerrian’s arrest after her husband’s announcement, as this is the sheriff’s normal tactic.

“I saw it coming, that’s just how he operates,” said Williams, who was at the courthouse Thursday to support Gerrian Hawes. “You give him a little bit of bait, the snake will stick his head out because he does not have any self-control. That’s just what he does.”

Indeed, as the video shows, the sheriff will have his minions allegedly silence anyone who attempts to dethrone him.