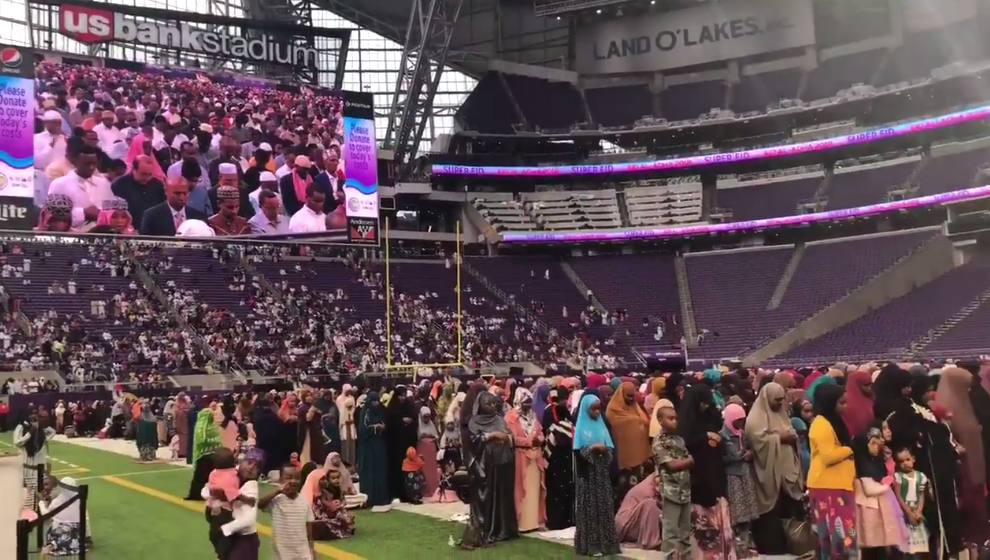 The Geller report was first to report on this massive show of Muslim Brotherhood power a few days back here.

As predicted, it is a massive display of power.

Why are you allowing an IMAM who called for the death of – the JEWS – to speak at your arena?https://t.co/dYcNQvHGJX

Meanwhile, over 2 million pilgrims carry out the final rites of the hajj in Saudi Arabia.

Pilgrims walked to a complex in Mina on Tuesday to throw pebbles at three columns. Muslims believe the devil tried to talk the Prophet Ibrahim out of submitting to God’s will there.

The final days of hajj coincide with the Eid al-Adha holiday, or “Feast of Sacrifice,” to commemorate Ibrahim’s test of faith. Muslims slaughter livestock and distribute the meat to the poor.

Here are the facts:

Several of the speakers at this event have connections to the missing Somali youth. Others are leaders in the Muslim Brotherhood in this country.

For example, scheduled speaker Asad Zaman is the executive director of the Muslim American Society in Minnesota. http://www.supereid.com/speaker/espen-brunberg/

Maneesey is the head of the Islamic University of Minnesota, a hotbed of extremism. https://www.investigativeproject.org/5288/islamic-university-of-minnesota-a-hotbed

THE ADDRESS FOR SUPER-EID, INC. IS RIGHT NEXT TO SEVERAL SOMALI MONEY EXCHANGE SERVICES, AS WELL AS SOMALI DAY CARE BUSINESSES.

Super EID – Suite 106. Madina Management LLC, Madina Management Market, Medina Coffee Shop; Another service which is a money transfer, I call it money laundering service transferring according to their website only to one country, Somalia.

When asked what the purpose of the Super Eid event was, the reply came that it was a display of “power.” https://youtu.be/r-J4gMgQirw?t=1m50s

It is indeed a display of power from the Sunni Muslim Mafia in this country.

IMAM CALLS FOR ‘KILLING AND DESTRUCTION OF JEWS’

John Guandolo, a former FBI counter-terrorism specialist who founded Understanding the Threat in an effort to train U.S. law enforcement officers, said he is very familiar with the Bloomington mosque.

Guandolo said al-Maneesey teaches straight from the Quran and the life of Muhammad, Islam’s founder, as laid out in the hadiths.

“When Imam al-Meneesey calls for the killing and destruction of Jews and references a story from the Islamic prophet Mohammad, he is referring to the hadith (report) from Bukhari, who is the most authoritative hadith scholar in all of Islam,” Guandolo told WND. “To be clear, Islamic scholars consider the hadith of Bukhari to rise to a level just below the Quran.”

In that hadith, Bukhari quotes Mohammad as stating:

This hadith is among the most authoritative Islamic texts, Guandolo said, which is why it can be found in the Hamas Covenant as well as in first grade text books in Islamic schools.

“The reason the al-Farooq mosque is producing jihadis who want to fight and kill Jews in the name of Allah is because that is what the mosque teaches,” said Guandolo, author of “Raising a Jihadi Generation.”

And it’s not just the Bloomington mosque that is teaching this doctrine.

Of the nearly 3,000 mosques now operating inside the United States, at least 80 percent have ties to the Muslim Brotherhood, a radical jihadist organization whose stated mission is to spread Shariah throughout the Western world.

“Since we know most of the mosques in America teach this same material as well, we should be aware that someday soon, many thousands of Muslims will wage war against the United States and its people just like they teach they should,” Guandolo said.