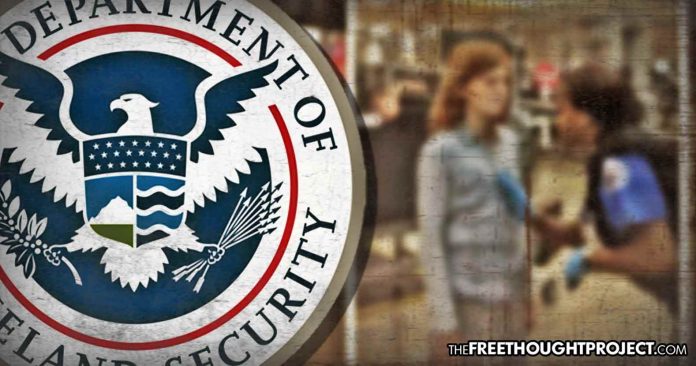 Arlington, VA — Daniel McAdams, Executive Director at Ron Paul Institute for Peace and Prosperity, was travelling back from the institute’s recent conference in Washington when he and his family were targeted by Transportation Security Administration officials at a TSA checkpoint and subjected to horrific treatment—up to and including his 13-year-old daughter’s sexual assault.

McAdams noted that he got the entire horrifying scene on video.

The abuse unfolded as McAdams, his wife, and their two daughters, 10 and 13, and their teenage son, arrived at the TSA checkpoint in the airport to fly home, and he detailed the abuse of his family his family in a blog post for LewRockwell.com. As they proceeded through the checkpoint, McAdams explained that up until this point, his wife was able to accompany their daughters through the metal detector. However, that was no longer the case.

“An aggressive TSA officer barked that my 13 year old girl could not accompany her mother and younger sister through the metal detector, but rather would have to submit to a ‘pat-down,’” McAdams said.

In the meantime, agents had already let their 10-year-old daughter through and she was no longer in sight. Naturally, McAdams and his wife became very uncomfortable with the situation.

When McAdams spoke up about being separated from his family, he was told not to raise his voice. Finally, they let his wife through to join their 10-year-old on the other side. However, they were not going to let his daughter through without first sexually assaulting her. He then watched as a TSA agent donned the infamous blue gloves and forced his 13-year-old daughter to undergo a “pat down.”

“I watched in agitation as a woman put on gloves and began to grab my young daughter’s genitals. I yelled at my wife to catch it all on the iPhone and she did,” said McAdams.

As he watched his daughter break down in tears as she was molested by the agent, McAdams was then subjected to his own enhanced pat down, seemingly as punishment for speaking up.

“As Agent Cohen started my own pat-down it was clear he was agitated. He did not like that we dared object to their demand for total submission. He began his run across my genitals and I turned my head to watch the sick scene of my 13 year old being assaulted. BAM! Agent Cohen’s hand banged my genitals and I nearly doubled over. ‘What a sick way to make a living,’ I commented.”

“Interfering with an investigation by moving during a pat-down,” was the reason the agent gave for calling the cops. Apparently, Americans are to stand their like statues even when TSA agents cause them severe pain by smashing their genitals.

When police arrived, luckily for McAdams, they were more amenable to peace than the TSA.

“Fortunately the Washington Metro Police Authority officer was cool and calm. He did not seem surprised at our situation at the hands of an extremely aggressive TSA. He asked our side of the story and then asked whether I required medical attention. I declined medical attention but remain in pain. He then encouraged us to discuss the matter with a TSA supervisor, which we agreed to do,” wrote McAdams.

During his conversation with the supervisor, who McAdams explained was around 60 years old, a telling admission was made, highlighting the disturbing nature of the TSA and the American police state in general.

As their conversation began, McAdams threw the TSA supervisor off guard, asking him, “are you a father?”

“I am a grandfather,” he replied.

“How would you feel if your young daughter or grand-daughter was forced to submit to a woman grabbing her genitals?” asked McAdams.

“It’s sick what our country has become,” McAdams added.

Below is a video Kevin Payne’s 10-year-old daughter who underwent a similar “pat down” from TSA. This is what children are now subjected to in the land of the free.