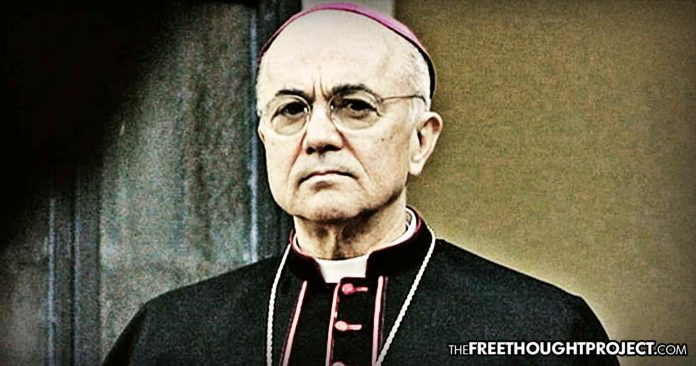 As TFTP reported earlier this week, a former Vatican diplomat released a historical 11-page testament accusing the catholic church — up to and including the pope — of not only failing to act on the child abuse scandal, but also being complicit in covering it up. Archbishop Carlo Maria Vigano wrote in a letter that Pope Francis knew of the allegations for years and did nothing to stop it. Now, it has been reported that Vigano has been forced into “hiding” because he is in fear of his life.

As TFTP reported,  Vigano released the bombshell report accusing the pope of covering up the allegations and asked for his resignation.

“Pope Francis has repeatedly asked for total transparency in the Church. He must honestly state when he first learned about the crimes committed by McCarrick, who abused his authority with seminarians and priests. In any case, the Pope learned about it from me on June 23, 2013 and continued to cover him,” Vigano wrote.

Now, these statements appear to have gotten the retired archbishop in a world of hurt and the high-level catholic church officials may want to silence him.

This week, Italian blogger Aldo Maria Valli said that the archbishop told him that he purchased an airplane ticket and that he would never see him again.

“He will leave the country. He cannot tell me where he is going. I am not to look for him. His old mobile phone number will no longer work. We say goodbye for the last time.” Valli said of what the archbishop told him.

Valli’s claims were also backed up in a report for EWTN, in which Catholic journalist Edward Pentin confirmed it, saying Viganò fears for his safety and that his life is in danger.

“Also what’s being discussed is the safety of archbishop Vigano,” Pentin reported on Monday. “He fears that by coming forth with a lot of these allegations that his life is actually in danger.”

As OnePeterFive noted in a report, a former apostolic nuncio, widely respected for his professionalism and decency, forced to go into hiding at age 78 for simply telling the truth about his fellow apostolic successors. There is perhaps more wisdom in this than there appears to be at first glance. Viganò’s colleague, Monsignor Jean François Lantheaume, whose job it was to inform Cardinal McCarrick of the news that Pope Benedict XVI had levied sanctions against him because of his abuses, said earlier this week, after confirming the veracity of the Viganò report:

These may be the last lines I write… if I am found chopped up by a chainsaw and my body sunk in concrete, the police and the hacks will say that we have to consider the hypothesis of suicide!!!

As TFTP reported earlier this month, the recent revelations of abuse in the church is just the tip of the iceberg. A scathing grand jury report revealed that hundreds of Catholic priests in the state of Pennsylvania sexually abused young children, a portion focuses specifically on Pittsburgh where nearly 100 priests are accused of running a pedophile ring where they helped each other prey on helpless children with no oversight.

The report claims that at least 99 priests in the Pittsburgh Diocese were involved in the pedophile ring—nine of whom were not named—and they received help from local officials who refused to explore investigations into the abuse because it was considered “bad publicity” for the Catholic Church.

The priests are accused of working together in a predatory ring that was ongoing for years in which they “manufactured child pornography, shared intelligence on victims and gave large gold crosses to certain boys to mark them as already being ‘groomed,’ for abuse,” according to a report from Penn Live.

The abuse has been ongoing for decades, victims have been warning us, and no one has listened until now. If archbishop Vigano happens to commit suicide by shooting himself in the back of the head, twice, we may come to find out why it took decades for this disgusting ring of predators to be exposed.