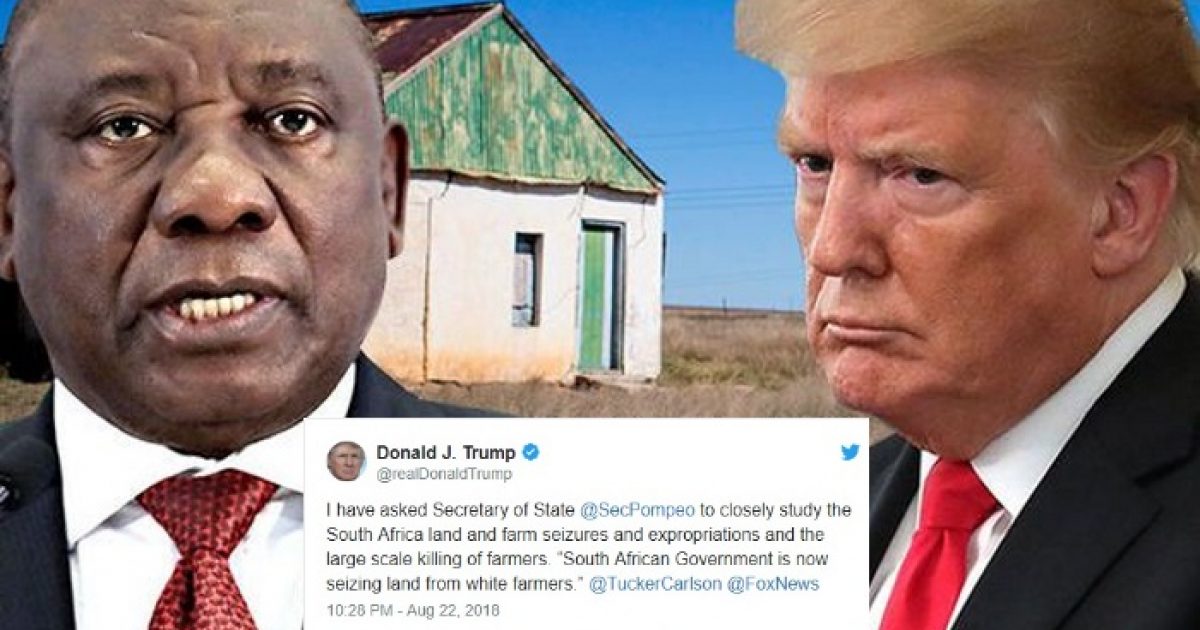 For the past 10 years, GR has reported on the systematic racism and dehumanization of whites in South Africa. To speak of such things was heresy. And yet here we are —

South Africa has made the news in recent weeks for its ruling party’s determination to strip farmland from white owners.

The White House has finally weighed in on the matter and President Donald Trump told Secretary of State Mike Pompeo to study the farm seizures.

I have asked Secretary of State @SecPompeo to closely study the South Africa land and farm seizures and expropriations and the large scale killing of farmers. “South African Government is now seizing land from white farmers.” @TuckerCarlson @FoxNews

And now, largely because of the U.S. scrutiny, the ruling ANC party has withdrawn its plans to “redistribute” — i.e., seize and steal — farmland from whites.

The Daily Mail has more:

It comes after Trump criticised the country’s land reform plans in a tweet that touched on the overwhelmingly white ownership of farmland in South Africa – one of the most sensitive issues in the country’s post-apartheid history.

‘I have asked Secretary of State… (Mike) Pompeo to closely study the South Africa land and farm seizures and expropriations and the large scale killing of farmers,’ tweeted Trump to his 54 million followers.

His tweet apparently followed a segment on conservative Fox News about Pretoria’s plan to change the constitution to speed up expropriation of land without compensation to redress racial imbalances in land ownership.

The country is in the middle of a racially charged debate over land reform, a lawful process that seeks to correct the legacy of decades of white-minority rule that stripped blacks of their land.

According to President Cyril Ramaphosa, who himself farms cattle on a 5,100 hectare ranch, the white community that makes up eight percent of the population ‘possess 72 percent of farms’.

In contrast, ‘only four percent’ of farms are in the hands of black people who make up four-fifths of the population.

The stark disparity stems from purchases and seizures during the colonial era that were then enshrined in law during apartheid.

In July, Ramaphosa said the ruling African National Congress party would amend the constitution so the state could start to expropriate land without compensation to speed up the process of land redistribution, but that has not yet happened and no land has been seized.

A fringe group of the white minority claims land reform will inspire violent attacks, though experts say farm attacks reflect the country’s generally high crime rate and are on the decline.

Claims of ‘genocide’ against white South Africans, however, have been picked up by some white nationalists in the U.S., and leaders of a right-wing South African group traveled to the U.S. in May to lobby officials about the alleged targeting of white farmers.

Trump’s tweet was quickly lambasted by many in South Africa, with one top ruling party official, Zizi Kodwa, telling the Associated Press that Trump has never experienced apartheid and doesn’t know its legacy of stark inequality.

Nauert toned down Trump’s language suggesting that massive land seizures were underway and did not repeat the president’s suggestion that large numbers of white South African farmers had been killed.

Trump’s tweet did find support among some South Africans, while some farmers spoke out about their security concerns.

‘We try very hard not to go and live in a walled security area somewhere, but it costs a lot of money in the first place to have the necessary security,’ said Leon Sholtz, a farmer in Broederstroom in North West province.

‘It is fact that we have lost four of our neighbors in the last 10 to 12 years due to farm murders. … I think it is something that the government should look into and try and stop as soon as possible.’