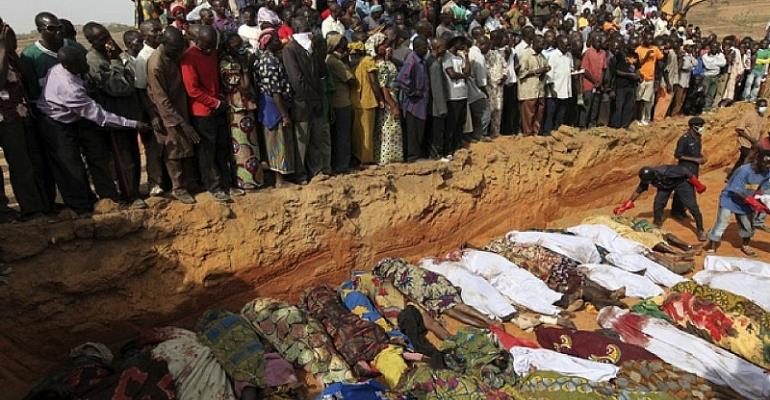 Another Islamic genocide systematically ignored by the leftwing press.

And the UN is super busy: ‘Abusive anti-Israel bias at UN is pathetic’

NIGERIA: ANTI-CHRISTIAN VIOLENCE ON THE RISE, MORE THAN 6000 KILLED IN 6 MONTHS

CHRISTIAN PERSECUTION IN NIGERIA RISES SHARPLY THIS YEAR, AS 6000 CHRISTIANS HAVE BEEN KILLED SINCE JANUARY UNTIL NOW. FOR THIS REASON THE UNITED NATIONS HAS ALSO BEEN URGED TO TAKE SERIOUS ACTION IN ORDER TO STOP THE MASSACRE OF NIGERIAN CHRISTIANS. CHRISTIAN ASSOCIATION OF NIGERIA, (CAN) REPORTS THAT SINCE THE INTERNATIONAL COMMUNITY IS OVERLOOKING MASS SLAUGHTER OF NIGERIAN CHRISTIANS.

CAN reports that more than 6000 have lost their lives since this year began. National Christian Elders Forum, associated with the Christian Association met with the British High Commission in May earlier this year. The forum issued a summary saying:

The object, of course, is to supplant the Constitution with Sharia as the source of legislation. The current 1999 Constitution is plagued with dual conflicting ideology of Democracy and Sharia. There are certain values, which are non-negotiable in a pluralistic society, and it seems the advocates of the Caliphate do not respect this.

A dual-ideology-driven Nigeria cannot be the Nigeria of our dream. We want a Nigeria, where citizens are treated equally before the law at all levels….bearing in mind that Christians constitute over 50 percent of the Nigerian population, the goal of the Islamists is bound to create serious conflicts, which if not checked, are capable of escalating into another civil war. Already the Islamists are murdering Christians with impunity and destroying vulnerable Christian places of worship and communities at an alarming and inhuman rate.”

On August 13, the European Centre for Law and Justice reportedly filed an official letter requesting the UN to “recognize and put an end to the atrocities being carried about against Christians in Nigeria.” The letter warned that: “Nigeria has become home to radical groups that seek to eliminate Christianity from the country.”