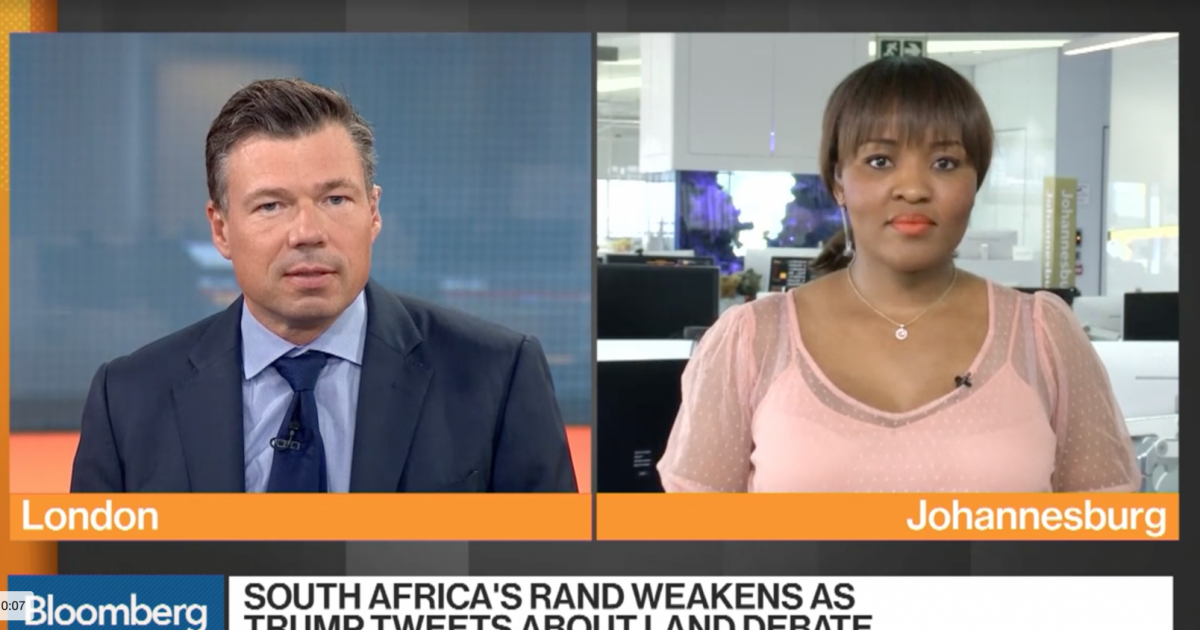 After President Trump tweeted about the mistreatment of white farmers in South Africa, the media rushed out stories justifying the ANC regime’s plans to ethnically cleanse white farmers by seizing land without compensation. These stories invariably contained a popular fake statistic abused by racists.

Bloomberg pretended to conduct a fact check by accusing Trump of misleading the public and claimed that, a “land audit released in February showed that whites own 72 percent of the land.”

“Land reform is a highly divisive issue in South Africa, where white residents, who make up 8 percent of the population, own 72 percent of land, according to official figures,” the New York Times observed.

“Whites own 72 percent of the 37 million hectares held by individuals,” the Washington Post contended.

The hedging isn’t hard to spot.

For example, the Ingonyama Trust, controlled by the Zulu king, has 3 million hectares of land. The ANC’s decision to seize the king’s land has made fewer headlines, but has been even more explosive.

The Washington Post’s claim that “whites own 72 percent of the 37 million hectares held by individuals” has to be placed within the context of the 93 million acres of arable agricultural land in South Africa.

Even if the claim were true, that would amount to white farmers owning 27% of the agricultural land.

But the land audit wasn’t addressing agricultural land. So even that claim isn’t true and doesn’t hold up.

The 2017 land audit stated that only 33% of the land in South Africa is owned by individuals. One report on the survey claimed that white South Africans own 23.6% of rural land.

The land audit is nevertheless the source of the 72% claim even though it doesn’t really address farmland. The South African Institute of Race Relations called the land audit a “deeply questionable” source. The media would not normally take statistics from a government intent on seizing land from farmers as absolutely reliable. That it chose to not only do so, in this case, is due to its political bias.

The media plucked a misleading statistic from a dubious report by a corrupt government bent on ethnic cleansing land seizures, and then somehow made it worse by removing most of the context.

The idea that 32,000 white commercial farmers control most of the land in South Africa is bizarre nonsense. And the media’s decision to imply that this is so, while misrepresenting the statistics, is a typical example of fake news. Worse still, it’s fake news in the service of racism and ethnic cleansing.

The media claims to love fact-checking.

Africa Check, a fact-checking site whose partners include AFP and reliable lefty backers like George Soros and Pierre Omidyar, rated a similar claim that whites own 80% of South Africa as incorrect.

“According to Mmuso Riba, the Chief Surveyor-General, ‘there is no basis’ for the claim that whites own 80% of South Africa”, it noted.

Land area is also not a very useful metric, because much of South Africa’s land is semi-desert. In KwaZulu-Natal, 73.5% of agricultural land is owned by the government and “previously disadvantaged individuals”; in the Eastern Cape, it’s 48.3%; in Limpopo, it’s 52%; in the North West, it’s 45.3%.

And these are the areas with some of South Africa’s most fertile land. One measure claimed that South Africa’s black population already owns 48% of the agricultural potential. Much of South Africa’s land is entangled in a complicated system of government-managed or collective forms of land ownership.

If the South African government already owns so much land, why does it need to seize more land from white farmers?

And since the ANC has been in power for so long, why is individual black land ownership so low?

The ANC has acquired millions of hectares of land, but has been very slow to turn them over. Especially to individuals. Instead, many black people engage in subsistence farming on land “held in trust” by the government. This feudalism goes unreported and unremarked because the slave owners are black.

And despite the racist rhetoric of the ANC and the EFF, there isn’t much demand for land.

South Africa’s agricultural sector is in decline. The land is far more vital for growing food that supports the country’s mostly black population than for export. These days, South Africa imports food.

Even back in the era of the Land Claims Court, there wasn’t much interest by the black population. The Land Claims Court had accepted 76,000 of 80,000 claims, but instead of producing 76,000 black farmers, who would have easily outnumbered the much smaller number of white farmers, only 5,800 wanted land, the rest took the cash. Around 8 million hectares were transferred through land redistribution.

But it still remains very difficult to be certain of who owns what in South Africa.

The media pretends that South Africa, a deeply broken society with horrifying crime rates (55 people are murdered every day), with the fourth highest adult HIV prevalence in the world,  and where 1 in 4 women have been raped in some areas, is capable of compiling valid and accurate statistics.

Instead, South Africa’s statistics are a stew of old and new, partial and incomplete numbers. Some of its statistics leave out crucial metrics. Others are entirely outdated. The Africa Check fact check noted that the Department of Agriculture, Forestry, and Fisheries (DAFF) was using a dataset from 1991.

There are multiple competing reports, both from the government, from local areas and farming associations. Some of these reports disagree on very basic details and numbers.

The statistics that do exist are often confused. 111 million hectares of land in South Africa are registered as farms, while only 93 million are used for farming which enables all sorts of statistical mischief. The number of farms may only reflect farms large enough to be counted. Deeds don’t state the race of the owner so various reports have relied on the last name of the owner to guess at his race. But some black and ‘coloured’ South Africans use English and even Dutch names. Also, some white farmers partner with black farmers without the land formally changing hands so that even this metric is basically unreliable.

The statistics that appear in this article are all ‘guesstimates’ of one kind or another. The only firm fact about land ownership in South Africa is that no one really knows anything for sure.

The media’s choice to take the 72% figure and run with it is another reminder that is not only deeply biased, but thoroughly untrustworthy in any area where its biases come into play. Many major media outlets, including CBS News, appear to have done no research before repeating the statistic. Few have qualified it in any way. Had Trump quoted a statistic, a legion of fact checks would have followed.

But when the media quotes dubious statistics from a corrupt government, while distorting those statistics even further, to justify ethnic cleansing, there are no fact checks. Just awards.

After Trump’s attacks, the media and its allies have claimed that they are the defenders of the truth. And that only liars fear the media. But the facts show that the media isn’t in the business of truth. It spins narratives, it throws out attacks and even its fact checks have degenerated into political attacks.

Mostly it lies because it has no incentive to tell the truth.

The media is a declining institution patronized by lefties who agree with it. Its motive force is churning out clickbait to maximize its audience share on the left. And the left agrees with everything on the left.

This echo chamber doesn’t produce journalism. It churns out fake news, backed by fake statistics, fake experts, in the service of political causes. After Trump’s tweet, the media’s best and brightest had an hour to assemble a piece attacking him and supporting South Africa’s government. They all jumped on the 72% statistic because it fit their narrative and filled a moral and ethical hole in their stories.

That’s how fake news happen. It’s why the media echo chamber is a threat to the facts and the truth.

It can even kill.