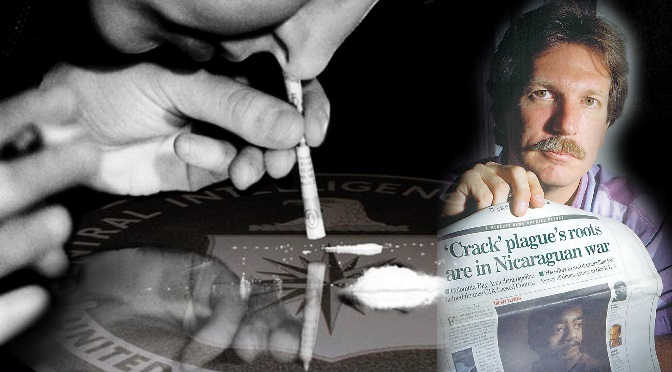 Those who expose the truth or are looking to uncover it often come to untimely ends.  Such is the case with journalist Gary Webb, who would have turned 63 years old on Saturday.  Many may not remember Webb, but his groundbreaking reports on the Central Intelligence Agency’s cocaine trafficking caused quite a stir in the media and the government against him back in the mid-90s.  Ultimately, that reporting and the aftermath of it would lead to his death, an allegedly suicide with not one, but two gunshots to the head.

Below is a report on Webb’s life and reporting by Johnny Liberty, courtesy of The Free Thought Project.

For the better part of a decade, a San Francisco Bay Area drug ring sold tons of cocaine to the Crips and Bloods street gangs of Los Angeles and funneled millions in drug profits to an arm of the contra guerrillas of Nicaragua run by the Central Intelligence Agency, the San Jose Mercury News has found.

On August 22nd, 1996 the San Jose Mercury News shocked the country with a series of articles entitled ‘The Dark Alliance’ detailing the CIA’s connection to the crack epidemic that terrorized the nation in the 1980’s and destroyed countless lives in its wake.

After the article’s publication, the story’s author, award-winning journalist Gary Webb, was initially hailed as a hero before a massive smear campaign attacked his credibility and destroyed his career.

The Origins of “An American Hero”

Gary Webb was born on August 31st, 1955 in Corona, California. He began his career in investigative journalism in 1978 as a local reporter for the Kentucky post.

In 1980, Gary won his first professional award for a 17 part series called ‘The Coal Connection’ which investigated the murder of an international coal company president with ties to organized crime.

Webb followed ‘The Coal Connection’ with a scathing 1985 report entitled ‘Doctoring the Truth’. The report led to an Ohio house investigation and subsequent changes to the state’s medical practice act.

Gary began working as an investigative reporter for the San Jose Mercury News in 1988. Within a year his reporting contributed to the paper winning a Pulitzer prize for their coverage of the 1989 Bay Area Earthquake and its aftermath.

CIA, Crack & The Contras: The Story of a Lifetime

It wasn’t until 1995 that Gary began work on what would become the biggest story of his career when he received a tip about a cocaine trafficker named Danilo Blandòn, and his relationship with LA drug dealer‘Freeway’ Ricky Ross.

Over the course of a year, he interviewed dozens of witnesses, high-level Government officials and drug cartel leaders. After meticulously piecing together his shocking discovery, Webb and the San Jose Mercury Times published ‘The Dark Alliance’.

While the importance of his report cannot be understated, ‘The Dark Alliance’ was not the first time reporters had established the connection between the CIA and cocaine trafficking.

In 1985, journalists Robert Parry and Brian Barger from the Associated Press reported that various groups of the CIA-backed Contras “engaged in cocaine trafficking, in part to help finance their war against Nicaragua.” Parry would later call Webb “an American hero” for his in-depth investigation and reporting on the topic.

In a time when the internet was in its infancy, Webb’s report was released online, with links included to all of his sources. Demonstrating the power of free and open access to information, Webb’s story quickly went ‘viral’ before the term ‘viral’ existed. The article garnered hundreds of thousands of clicks every single day prompting responses from the mainstream media, congressional leaders, activists, and the CIA itself.

Initially, the agency seemingly failed to respond to Webb’s story, but in true government fashion, it wasn’t long before an army of mainstream media outlets began to defend the CIA and attempt to discredit Webb.

In 2014, the CIA released documents detailing how they used a complicit media and a targeted strategy to denounce Webb’s 20,000 word report. Nicholas Dujmovic, the author of a CIA report entitled, Managing a Nightmare: CIA Public Affairs and the Drug Conspiracy Story, noted:

“The CIA watched these developments closely, collaborating where it could with outlets who wanted to challenge Webb’s reporting. Media inquiries had started almost immediately following the publication of ‘Dark Alliance,’

You Can Kill the Messenger, but Not the Message

Due to the backlash from Webb’s article, the Mercury News published an editorial calling his report “flawed” and reassigned him, which eventually prompted Gary to resign.

Despite his resignation, Gary continued investigating the scandal he exposed and published his book Dark Alliance: The CIA, the Contras, and the Crack Cocaine Explosion

in 1998. He also continued to contribute to numerous reports and documentaries.

Sadly, the story that became the most important of his career, helped lead to Webb’s downfall. Gary divorced from his wife in 2000, though the two remained close during his final years.

After divorcing his wife, being unable to obtain work from newspapers and facing increasing debts, Gary was forced to sell his home.

On December 10th, 2004 Gary Webb was found dead of two (allegedly self-inflicted) gunshots to the head. As The Independent reported, in an interview with Gary’s ex-wife Susan Webb:

“When removal men arrived, on the morning of 10 December 2004, they found a sign on his front door, which read: ”Please do not enter. Call 911 for assistance. Thank you.” Webb’s corpse was found in the bedroom, with two gunshot wounds to the head.”

While we may never know what happened to Gary Webb on the day of his death, We must never forget the truth about what he exposed and the extraordinary measures the government took to silence him.