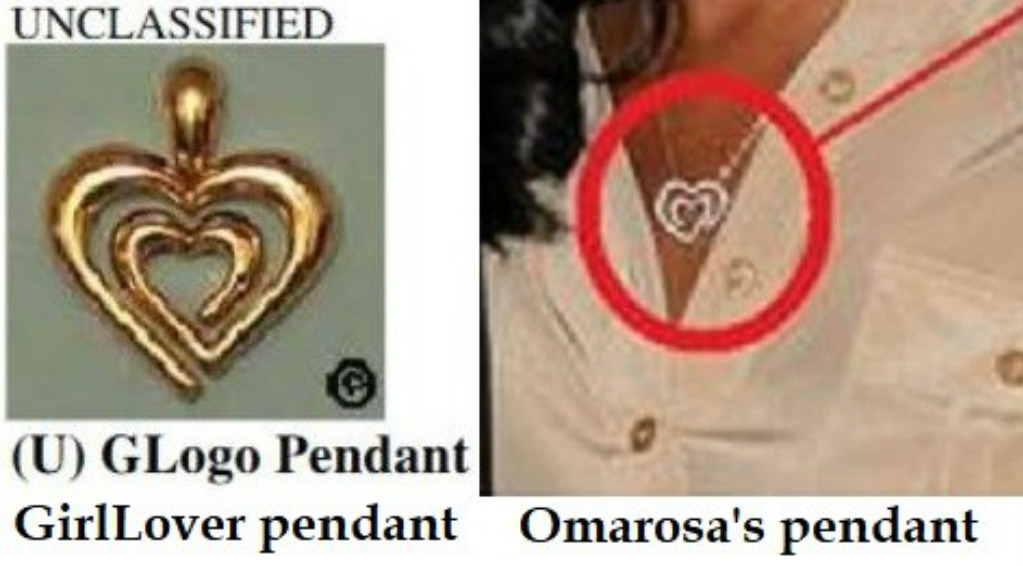 Pedophiles…are using various types of identification logos or symbols to recognize one another and distinguish their sexual preferences…. These symbols have been etched into rings and formed into pendants, and have also been found imprinted on coins….

Pedophilia symbols on jewelry, coins, Web sites and other effects are indicative of advertisement methods used by child sexual predators to promote their cause. Pedophile activists advocate for the social acceptance of sexual relationships between adults and children. These organizations seek to decriminalize sexual relationships between adults and children and to legalize child pornography based on their belief that children have the ability to consent to sexual acts.

Below are the symbols for “girl lover” pedophiles, according to the FBI — “a small heart surrounded by a larger heart, which symbolizes a relationship between an adult male or female and a minor girl.”

Omarosa Newman, 44, known as Omarosa, is the fame-hungry woman who became a “celebrity” as a contestant on the first season of Donald Trump NBC’s reality television series The Apprentice in 2004.

In the 1990s, Omarosa had worked in the Clinton administration, first in the office of Vice President Al Gore, then transferred to the Commerce Department.  Gore’s former office administrator, Mary Margaret Overbey, said Omarosa “was the worst hire we ever made”; Cheryl Shavers, who was the Commerce Department’s Undersecretary for Technology Administration, said Omarosa was “unqualified and disruptive” and that “I had her removed.” (Wikipedia)

Despite her shoddy work history in Washington, DC, Trump brought Omarosa to work for him, first as Director of African-American Outreach in his 2016 presidential campaign, then into the White House as Assistant to the President and Director of Communications for the Office of Public Liaison. She lasted a year, from January until December 13, 2017, when she resigned, although CNN reported that she had been fired by White House Chief of Staff John Kelly. The U.S. Secret Service did not deny reports that Omarosa had been forcibly removed from the White House grounds on December 12.

Beginning in February 2018, Omarosa publicly turned against President Trump, culminating in the publication of her book, Unhinged, on August 14, 2018, in which she calls Trump a “racist” and claims that there are tapes of Trump using the “n-word” during the filming of The Apprentice.

I have observed before that the most virulent anti-Trumpers seem to have terrible personal secrets that, if uncovered, can ruin them.

So it is with Omarosa Newman.

Below are pics of Omarosa with actor Michael Clarke Duncan, showing her wearing a necklace with the girllover pendant:

Below are side-by-side pics of the FBI’s girllover pedophile pendant and Omarosa’s pendant:

Omarosa began dating Michael Clarke Duncan in August 2010, and became his fiancee. In April 2012, Duncan changed his will to make Omarosa his main beneficiary. In July 2012, Omarosa found Duncan in cardiac arrest and resuscitated him with CPR. But Duncan never fully recovered from the heart attack and died on September 3, 2012, after two months in hospital.