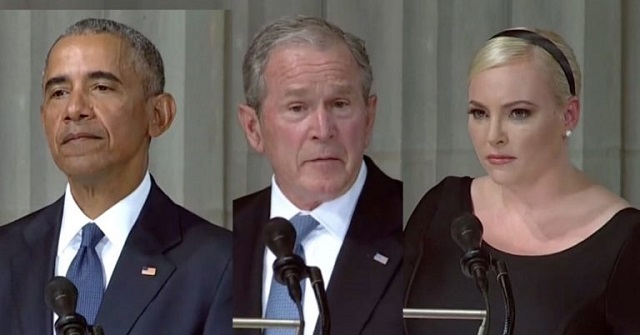 WASHINGTON (AP) — John McCain’s daughter and two former presidents led a public rebuke of President Donald Trump’s divisive politics at the late senator’s memorial service Saturday in a call for a return to civility among the nation’s leaders.

The nearly three-hour service at the Washington National Cathedral was a remarkable show of defiance against a president McCain openly defied in life as the antithesis of the American spirit of service to something greater than any individual.

Standing near McCain’s flag-draped casket and with Trump’s daughter in the audience, Meghan McCain delivered a broadside against the uninvited president without mentioning his name.

“We gather here to mourn the passing of American greatness — the real thing, not cheap rhetoric from men who will never come near the sacrifice he gave so willingly, nor the opportunistic appropriation of those who lived lives of comfort and privilege while he suffered and served,” she said, her voice first choking back tears. Then, it rose in anger.

“The America of John McCain,” she added, with a reference to Trump’s trademark phrase, “has no need to be made great again because America was always great.”

The audience of Washington power players erupted in applause.

Make sure to watch the clip of Megan McCain to see the vitriol and hatred dripping off every word:

Here’s some lowlights of Bush and Obama:

John McCain’s America, to quote Steve Sailer, was one of “endless aggression abroad and abject surrender at home.”

McCain was never great, that’s why he’s being defined not by his own accomplishments but by his “resistance” to “Blumpf.”

Shows of elite unity, like this McCain Holy Week, are a defense mechanism. They know their standing is precarious. So they create this weird mythology to justify their existence. Fewer and fewer are buying it.

"“He was honest. No matter whom it offended. Presidents were not spared."

"They lied. There were no weapons of mass destruction, and they knew there were none." – @realDonaldTrump https://t.co/BAwHgEujV8

At most funerals I’ve attended, it’s God’s love that fills the room, not hate and animus for a person who is not even in attendance.

This new trend of using funerals and eulogies to deliver political messages is really quite disgusting.

Sympathy from death as means to sway public opinion is next level corrupt.

Everyone involved should be ashamed of themselves.

Our great president, who was not invited to McCain’s funeral and likely wouldn’t want to go anyway, spent the day golfing at his club in Sterling, Virginia.

President Trump is golfing today at his golf club in Sterling, Virginia pic.twitter.com/ly9msBPvZt

no, he's got a crew with him pic.twitter.com/9vDeYwxhrD