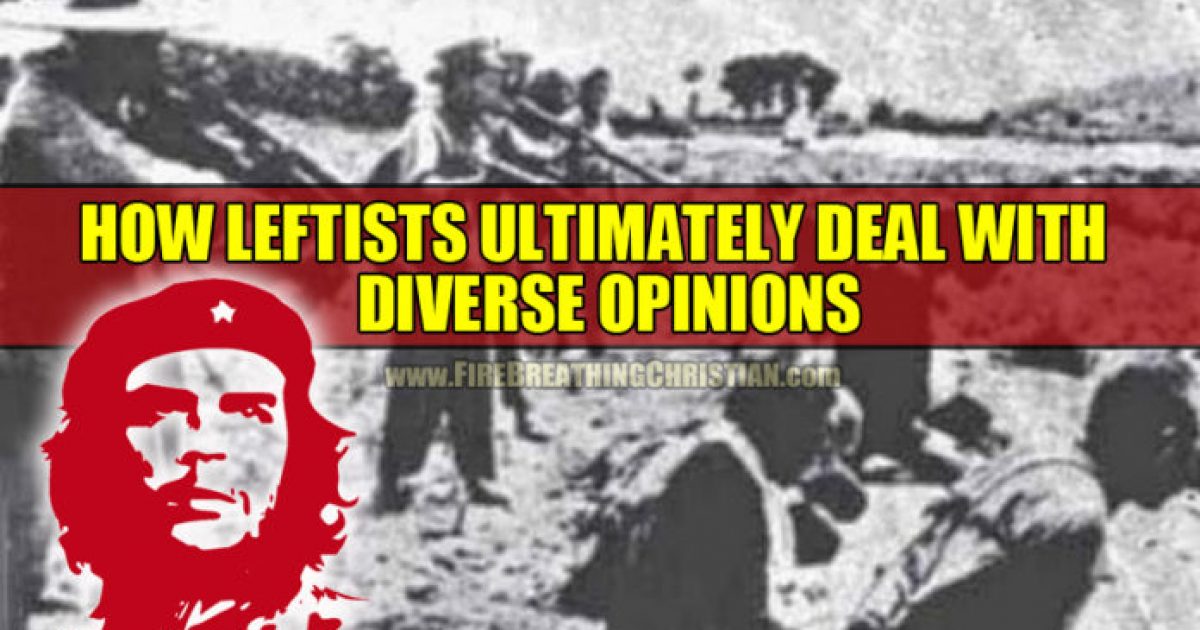 Why is it becoming commonplace for Leftists and anti-Christians of various sorts to openly advocate and practice acts of physical violence against those who dare not share (and have the nerve to openly oppose) their worldview?

For the same basic reason that major corporations are now colluding in an attempt to de-platform those who push back against the Leftist/Statist/anti-Christian propaganda and narratives routinely pumped out by mass media and “mainstream” political leaders.

Do not make the mistake of believing that this treatment is reserved for the likes of Alex Jones. Jones is the canary in the coalmine. The same basic threat of heavy economic persecution is being held over the head of every thinking person in America, and has been for quite a while now. The only difference today is that the situation has metastasized to the point that these threats are translating more and more into increasingly dramatic actions aimed at silencing dissent and intimating those who might be thinking about publicly expressing dissent.

For many years now in “the land of the free” and “home of the brave”, government and corporate systems have become increasingly open in their antagonism toward those who openly hold very basic, core, orthodox Christian views on such basic, core concepts as gender, sexuality, family, and marriage. Since I’ve started writing and speaking on these things publicly, I have watched the ease with which I used to be able to land a quality job in a corporate setting evaporate and transform into an inability to progress past the typical Google search now routinely deployed in corporate HR departments.

While in the grand scheme of things this is not Top Tier persecution, it is serious and it has serious consequences, economic and otherwise. There is a high economic price to be paid by the average person for speaking clearly and publicly as a Christian in America these days. This is why so few are willing to do it.

And it’s going to get worse – probably much worse – before it gets better.

Because for Leftists the path to increasingly suppressed opposition and diversity of thought is always the goal. It’s always the route that they take, regardless of how much they may spout rhetoric (and actually believe said rhetoric) to the contrary.

At the end of the day, dissent cannot be tolerated.

At the end of “the long march” through institutions like schools, churches, and businesses, those institutions cannot and will not tolerate dissent from the very narrow view of the Leftist/Statist perspective perched atop the hierarchy. Yes, the irony is thick with these people as they campaign for tolerance and against hierarchy while crushing all dissent in the establishment of their preferred hierarchy.

The bottom line is this: We all must shut up and obey.

We all must fall in line.

We all must embrace the same narrow, exclusivist, hypocritical, and tyrannical re-definition of tolerance.

If we don’t play along voluntarily, we must be forced to do so.

All fueled by State-created “money” printed (or typed) out of thin air.

We’re well down the track to the place where Statists on the Left and Right want us to be: A place of complete dependence upon the State.

That’s the long game being played here, and it’s the same game that ends up being played every time Leftist/Statist thought takes root and metastasizes in a land.

This is why one of the historic markers of Leftist/Statist dominance and “progress” in a land is the presence of mass graves filled with thousands and sometimes millions of bodies of people murdered by the State.

The spirit now on display in America with Leftists openly advocating and practicing the physical assault of those who won’t “get with their program” is the same spirit that produces, and has produced many times over centuries of history, mass graves filled with dissenters who “had to be eliminated” for “the good of the cause” and “the progress of civilization”.

The more power these people are given over others, the worse things get. They will eliminate dissent by whatever means made available to them.

Which leads us quite nicely to one of the favorite themes of the Leftist/Statist narratives: Gun Control.

We’ve touched on this several times in an effort to wake people up before they find themselves on the wrong side of a government gun for holding “the wrong views”. In articles like Nobody Does Mass Shootings Like Governments Armed With Gun Control and What Gun Control Really Means, as well as How about background checks for governments wanting guns? and Government Deploys Public School Drones In Battle For “Gun Control”, we’ve tried to help people understand both the systematic purpose and historic record of Marxist thought as it progresses through a culture as it is now in the United States. We’ve also done a video on the subject:

If the above embedded player doesn’t work, you can access the clip by clicking here. Please share it wherever you think it might be appreciated (or productively agitating).

For Leftists and Statists of all stripes, the endgame is and has always been the same: The forced conversion of everyone on the planet to a Leftist/Statist worldview. This is ultimately to be accomplished through the coercive power of the State and, when that power is not yet absolute in any given culture, then also through any coercive power that might be available through other economic, social, and educational tools.

At this point, I am very happy not to draw this post to a close by leaving it on what might feel like a bit of an Orwellian downer. The last thing we should be is pessimistic or depressed about the dire nature of our position.

The coolest part of this whole story – the best thing about this particular chapter of human history as God has ordained it – is that He is even now raising up technologies and opportunities not only for effective dissent against the Leftist/Statist tide, but for ultimate victory over them right here and now.

Through tools like PCs and the Internet enabling all manner of pushback against The Narrative of the Statists, we have been enabled and equipped in ways unimaginable during the recent past ages dominated by runaway Statism in places like the Soviet Union, Nazi Germany, and Communist China. If the anti-Christian religious power-brokers of 500 years ago feared the printing-press as a threat to their control of people through the control of information and narratives, how much more so are the defenders of centralized power terrified by the Internet, PCs, and other technologies that are bursting the chokepoints and obliterating the necessity of the systems that have for hundreds and even thousands of years, kept their State Power narrative afloat?

What we’re seeing now – and hopefully participating in now – is a race: A race between advocates of centralized power (on both the Left and the Right) and those who are developing and using God’s gifts through technology to bypass the chokeholds once maintained by those centralized powers.

State-sanctioned, State-licensed, and State-regulated schools, professions, and regulations covering every area of our lives are all utterly incompatible (and openly at war) with true, biblically defined freedom and liberty.

They’re all zombie dinosaurs just waiting to be put out of their misery…and ours.

So yeah, it is definitely time for each and every one of us to “get with the program” – the freedom and liberty program – by using whatever time, talent, and treasure God might have loaned to us in service to the advance of His Kingdom right here and now over the howls and attempted persecution of every Leftist/Statist that would stand in our way.

In this spirit, I ask that those of you who appreciate and benefit from our work here at Fire Breathing Christian consider making a donation to support our continuing effort to stand against the darkness and shine a biblical light as best we’re able.