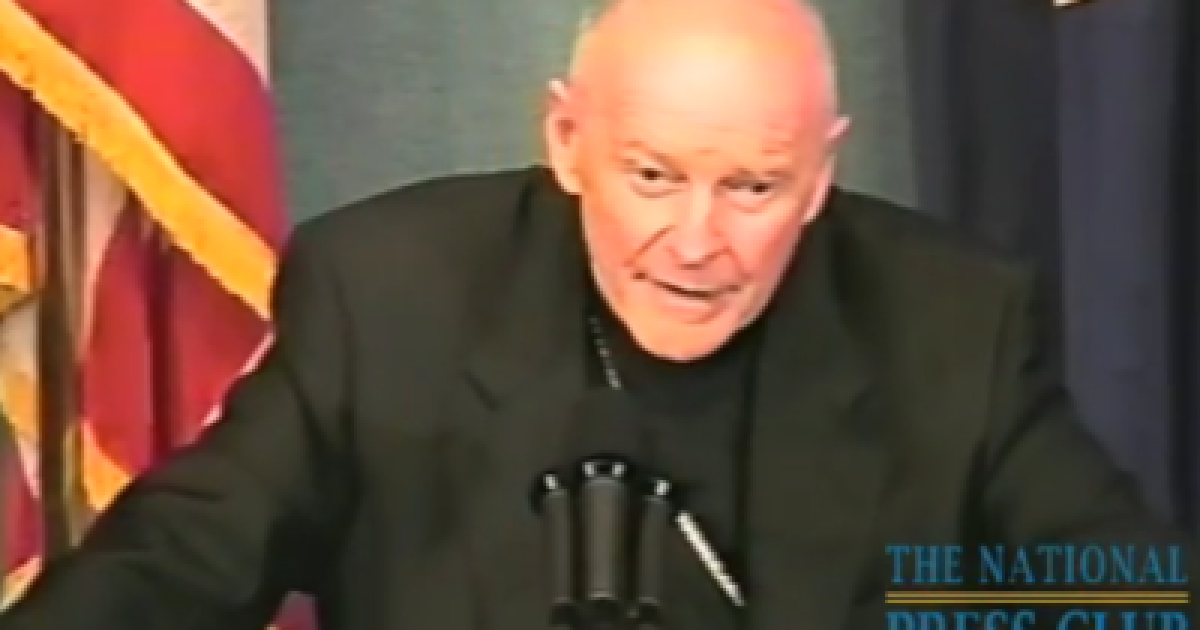 CNSNews.com reported Friday that Cardinal Theodore McCarrick, who has been removed from the Cardinalate over credible evidence that he sexually abused an altar boy, “gave a speech at the National Press Club in Washington, D.C., on June 8, 2001, when he was the archbishop of Washington, in which he noted the ‘sense of humanity’ found in ‘all the holy books,’ including ‘the Koran.’”

Is it surprising that intellectual dishonesty would accompany moral corruption? Has McCarrick ever actually read the Qur’an? Almost certainly not. If he ever does, here is some of the “sense of humanity” he will encounter:

“And kill them wherever you find them, and drive them out from where they drove you out; persecution is worse than slaughter. But fight them not by the Holy Mosque until they should fight you there; then, if they fight you, kill them — such is the recompense of unbelievers, but if they give over, surely Allah is all-forgiving, all-compassionate. Fight them until there is no persecution and the religion is Allah’s; then if they give over, there shall be no enmity save for evildoers.” (Qur’an 2:191-193)

“They wish that you should disbelieve as they disbelieve, and then you would be equal; therefore do not take friends from among them, until they emigrate in the way of Allah; then, if they turn their backs, seize them and kill them wherever you find them; do not take for yourselves any one of them as friend or helper.” (Qur’an 4:89)

“This is the recompense of those who fight against Allah and His Messenger, and hasten about the earth to do corruption there: they shall be killed, or crucified, or their hands and feet shall be struck off on opposite sides; or they shall be exiled from the land. That is a degradation for them in this world; and in the world to come awaits them a mighty chastisement.” (Qur’an 5:33)

“When your Lord was revealing to the angels, ‘I am with you; so confirm the believers. I shall cast terror into the hearts of the unbelievers; so strike the necks, and strike every finger of them!” (Qur’an 8:12)

“Fight them, till there is no persecution and religion is all for Allah; then if they give over, surely Allah sees the things they do.” (Qur’an 8:39)

“Make ready for them whatever force and strings of horses you can, to strike terror into the enemy of Allah and your enemy, and others besides them that you know not; Allah knows them. And whatever you spend in the way of Allah shall be repaid you in full; you will not be wronged.” (Qur’an 8:60)

“Then, when the sacred months are over, kill the idolaters wherever you find them, and take them, and confine them, and lie in wait for them at every place of ambush. But if they repent, and perform the prayer, and pay the alms, then let them go their way; Allah is All-forgiving, All-compassionate.” (Qur’an 9:5)

“Fight those who believe not in Allah and the Last Day and do not forbid what Allah and His Messenger have forbidden, and do not practice the religion of truth, even if they are of the People of the Book — until they pay the jizya with willing submission and feel themselves subdued.” (Qur’an 9:29)

“Allah has bought from the believers their selves and their possessions against the gift of Paradise; they fight in the way of Allah; they kill, and are killed; that is a promise binding upon Allah in the Torah, and the Gospel, and the Koran; and who fulfils his covenant truer than Allah? So rejoice in the bargain you have made with Him; that is the mighty triumph.” (Qur’an 9:111)

“O believers, fight the unbelievers who are near to you; and let them find in you a harshness; and know that Allah is with the godfearing.” (Qur’an 9:123)

“When you meet the unbelievers, strike their necks, then, when you have made wide slaughter among them, tie fast the bonds; then set them free, either by grace or ransom, till the war lays down its loads. So it shall be; and if Allah had willed, He would have avenged Himself upon them; but that He may try some of you by means of others. And those who are slain in the way of Allah, He will not send their works astray.” (Qur’an 47:4)

And more laughs regarding terrorism in particular:

“We will cast terror into the hearts of those who disbelieve for what they have associated with Allah of which He had not sent down authority. And their refuge will be the Fire, and wretched is the residence of the wrongdoers.” (Qur’an 3:151)

“When your Lord inspired to the angels, ‘I am with you, so strengthen those who have believed. I will cast terror into the hearts of those who disbelieved, so strike upon the necks and strike from them every fingertip.’” (Qur’an 8:12)

“And prepare against them whatever you are able of power and of steeds of war by which you may terrify the enemy of Allah and your enemy and others besides them whom you do not know, whom Allah knows. And whatever you spend in the cause of Allah will be fully repaid to you, and you will not be wronged.” (Qur’an 8:60)

How have Muslims throughout history understood these passages? They took them as meaning “Give the unbelievers a big hug, chuck them on the shoulder, and buy them a chocolate malt,” right? Unfortunately, the historical record is not quite so full of laughter and sunshine. Find out how Muslims throughout history have actually understood the Qur’an’s exhortations to warfare in my new book, The History of Jihad From Muhammad to ISIS

, which you can order here.