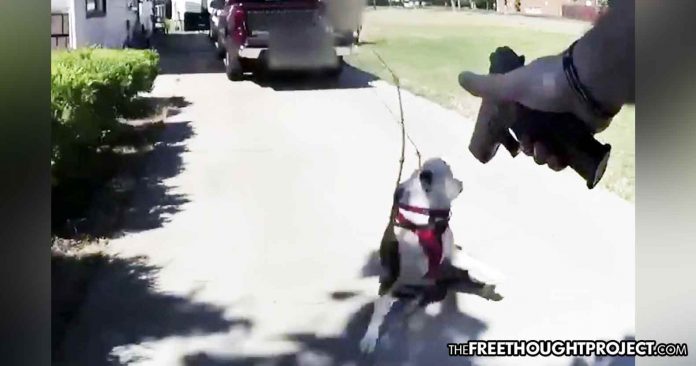 Ogden City, UT — For years, some of the most read stories we produce involve instances when police officers kill family pets, getting away with the killings by way of their qualified immunity. But the following story is one of the worst we’ve ever posted. An Ogden City Utah police officer actually shot a family dog while the pet was secured on the owners leash.

Representatives from the Division of Child and Family Services, also known in some states as Child Protective Services, was attempting to conduct a welfare check at the home of a local resident and asked Ogden police officers to accompany them. Officers J. Beck and J. Grime asked the homeowner if the dog was friendly and was reportedly told he was not but that he would bring the dog inside, away from any threat to the officers of the peace.

But before the homeowner could bring the dog—who was attached to a long cable leash—inside, one of the officers fired one shot, severely injuring the family’s pet. The homeowner then posted his dissatisfaction with the Ogden officers’ decision to open fire on his dog, a pit bull, in a post which has now gone viral.

It’s important to note the officers did not have to invade the dog’s personal space, a decision which put them in imminent danger. Nevertheless, the officers did and were reportedly attacked as a result—knowing full well that would be the case.

Shockingly, the Ogden Police Chief, Randy Watt, stood behind his officers actions claiming they acted appropriately and according to department policy. Watt stated:

The police chief’s statement then addressed concerns the viral video may have caused as he assured the public his department and its officers followed police procedure and protocol:

The investigation has been conducted and finds officer Grimes acted in accordance with department policies and procedures…The Ogden Police Department is sensitive to the concerns of the public in regards to the shooting of dogs, but also recognizes that sometimes situations arise in the course of an officer’s duties which require an officer to shoot a dog in order to protect themselves or a third party.

Very little of what Watt says will likely come as any consolation to the family whose pet was injured by an officer who refused to step back and wait for the homeowner to further secure his pet. Likewise, animal lovers will unlikely give the Ogden police officers a pass for recklessly endangering all involved for firing his/her weapon around innocent humans.

The whole incident takes police accountability activists, concerned with the skyrocketing instances of officer-involved shootings aimed at family pets to a whole new level. Not only are police officers killing family pets but they’re shooting pets who are on a leash. Fortunately, the officer was a terrible shot and the dog was treated for superficial injuries then released.