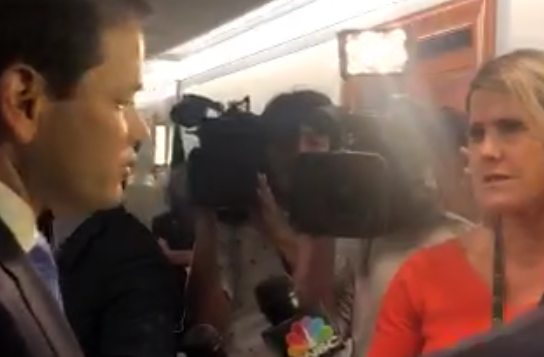 Radio talk show host and Infowars commander-in-chief Alex Jones interrupted Sen. Marco Rubio (FL-R) while he was giving a press conference at the Senate hearing on social media practices in which Twitter CEO Jack Dorsey gave testimony and the entire event was captured and streamed live on video.

When Jones brought up to Sen. Rubio that the Democrats are doing the exact same thing Rubio was accusing China of, Rubio ignored Jones altogether and acted like he didn’t know who he was.

“What about Democrats purging of conservatives,” Jones asked Rubio. “He’s not answering. The Republicans are acting like it’s not happening thank God that Trump is.”

The Senator from Florida tried to keep his composure as Jones a.k.a. the T-Rex of media patted him on the shoulder which appeared have triggered the turncoat’s inner-liberal.

When Jones replied ‘what am I going to get arrested now’ Rubio made clear he’s ready to get physical.

“You are not going to get arrested man — I’ll handle you myself,” Rubio told Jones.

“You are so mad,” Jones said. “You are not going to silence America.”