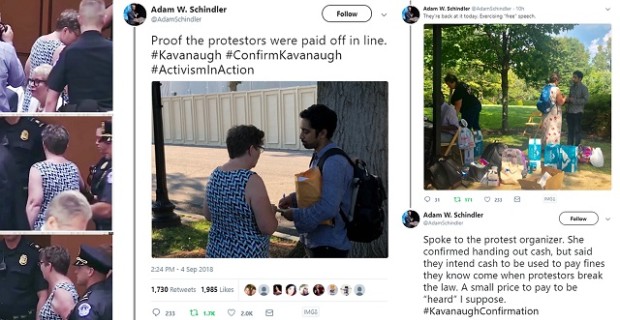 The man who was caught on camera paying off protesters who disrupted the Judge Brett Kavanaugh hearings has been identified as working for a Soros-funded organization.

As we reported yesterday, three doctors said they personally witnessed protesters being paid off before the Kavanaugh confirmation hearing.

“One thing was there were people who had come along… who had a bag of money, and people would hand them a piece of paper, and then they would give them money. So we know money was exchanged for some of the people to be here, just to protest,” said Dr. Tom Schlueter.

One of the women caught on camera being paid off was later seen being ejected from the hearings after demonstrators caused a disruption.

It has now emerged that the man seen paying off the woman works for a left-wing activist organization funded by billionaire globalist George Soros.

Krishnan’s bio lists him as a “social justice attorney”. The Center for Popular Democracy “receives the bulk of its funding from George Soros” and back in May last year announced that they were setting up an “$80 million anti-Trump network that will span 32 states and have 48 local partners.”

After he was identified, Krishnan locked down his Twitter profile.

While the media obsesses about non-existent Russian interference in the American political system, this represents solid proof of a foreign actor meddling in America’s political system by bankrolling fake astroturf protests designed to sow discord and create division.

Will the media cover this massive story?