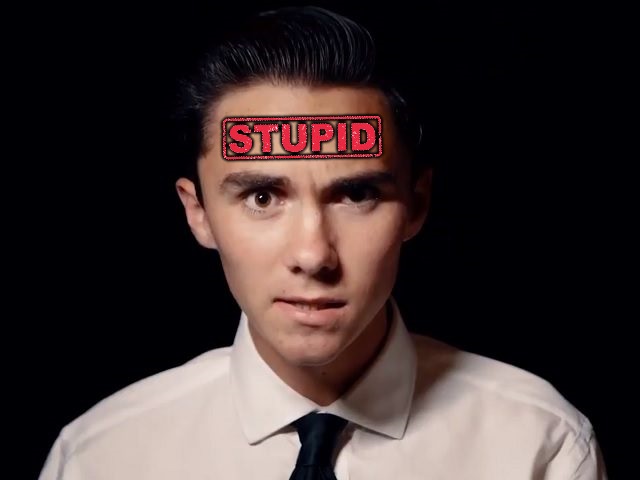 It’s really no wonder little Communist David Hogg was rejected from several colleges.  It’s actually a wonder he graduated high school with some of the utter rubbish that comes out of his mouth, and I’m not even referencing the vulgarities that ejaculate from his lips.  Earlier this week, Hogg said in response to comments by Supreme Court nominee Brett Kavanaugh’s comments about Ar-15s and other semi-automatic rifles that they really can’t be engaging in “defending yourself” with a weapon from that has an “effective range” of “1600 feet.”

Kavanaugh’s stated that “handguns and semi-automatic rifles are weapons used for hunting and for self-defense.”

That’s all fine and good, but the Second Amendment was not written to protect hunting.  That was a given in the time it was written.  Hunting and sports shooting really have nothing to do with the Second Amendment.  It was written to tell the government that was being established that the people had a God-given “right to keep and bear arms”and that right was not to be “infringed,” no matter the argument being made.

Hogg then took to Twitter to demonstrate his stupidity.  First, he did so by removing self-defense from the context.  Second, he attacked the rights of the people.

I wonder if Hogg has actually spoken to any military veterans who have probably defended themselves and their brothers in arms from such distances with rifles with even greater range.  I’m guessing not or he would never say it was “hunting” and recognize it was self-defense or assuming the rights of other individuals to protect their lives, much like the laws are regarding such actions in my home state of South Carolina.

I also wonder if Hogg is for the police having AR-15s.

While most self-defense encounters occur in close quarters and handguns are often used, that does not mean that semi-automatic rifles like the AR-15 are not used in self-defense.

Awr Hawkins reminds us over at Breitbart:

I reported back in June that a homeowner killed two burglars with his AK-47.

The point is that Hogg is not on the side of law-abiding citizens, America’s foundations or the US Constitution.  He is promoting gun confiscation with gun bans.  In other words, as a young man who is of age, he has chosen his side and as a result has become a domestic enemy.  I’m saying this as clear as I can so that if Hogg reads this by chance, he knows whose side he is on.  It’s not the side of freedom.