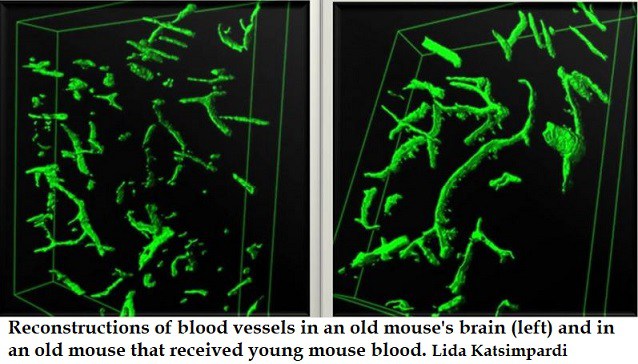 Vampirism is no longer the stuff of horror movies.

Vampires today don’t wear black cloaks, nor do they ingest blood via neck-bites. Today, perfectly healthy but wealthy people get their blood via transfusions, at $8,000 for 1.5 liters. The fictional Count Dracula ingests human blood to live; today’s vampires similarly get expensive blood transfusions for their alleged rejuvenating, life-extension effects.

In recent years, scientists studying mice found that giving old animals blood from young ones can reverse some signs of aging. Conversely, injecting old blood into young seemed to knobble the young rodents. As examples:

Blood plasma is the extracellular matrix of blood cells — a yellowish liquid component of blood that holds the blood cells in suspension. It is mostly water (up to 95% by volume), and contains dissolved proteins (6–8%) (i.e.—serum albumins, globulins, and fibrinogen), glucose, clotting factors, electrolytes, hormones, carbon dioxide (plasma being the main medium for excretory product transportation) and oxygen. Plasma also serves as the protein reserve of the human body. It plays a vital role in keeping electrolytes in balanced form and protects the body from infection and other blood disorders.

Beginning in 2017, under the guise of running a clinical trial, a startup called Ambrosia in Monterey, California, is offering transfusions of human plasma, allegedly harvested from young adults from local blood banks. It takes multiple donors to make one package. The transfusions cost $8,000 for 1.5 liters, pumped in across two days.

Ambrosia is run by Jesse Karmazin, 33, a medical school graduate without a license to practice medicine. Overseeing the so-called clinical trials is a licensed doctor, David Wright, who was disciplined in 2015 by the California Medical Board for giving his patients intravenous treatments of vitamins and antibiotics for “non traditional” purposes. A bioethicist from McGill maintains that Ambrosia calls its business a “clinical trial” because they would be unable to get FDA approval to sell the blood plasma transfusions otherwise.

As of August 2017, Ambrosia had 600 clients, with a median age of 60. While anti-ageing products usually hold more appeal with women, most of Ambrosia’s clients are men.

PayPal founder Peter Thiel has expressed interest in having transfusions. According to Gawker, Thiel spent $40,000 a quarter on regular transfusions from 18-year-olds. He and others in the death-evading “transhumanist” movement are fascinated by “heterochronic parabiosis” – the sewing together of two animals in order to create a living chimera. Studies going back decades show the regenerative effects of one organism being joined to another.

In 2018, an Ambrosia rival, the Young Blood Institute, also hawks “clinical trials” of young blood transfusion for $285,000 per person. The so-called “trials” of both Ambrosia and Young Blood Institute are unscientific because they have no controls and are not randomized or blinded. But Karmazin claims positive results — of improvements in sleep and declines in levels of carcino-embryonic antigens and amyloids — proteins involved in cancer and Alzheimer’s disease — of as much as 20% .