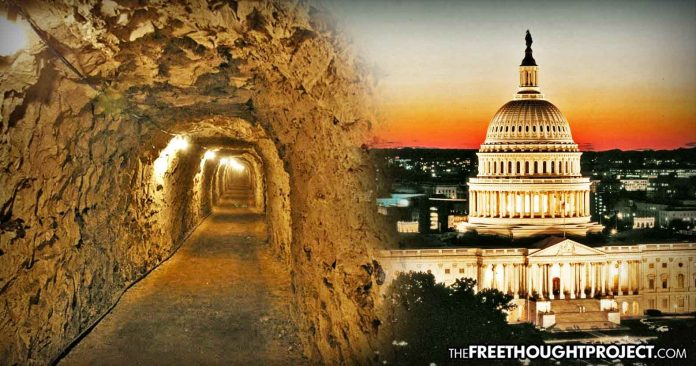 Bethesda, MD — Ever since the beginning of the Pizzagate conspiracy theory, rumors have abounded of a network of secret underground tunnels in which children are trafficked to the elite in Washington D.C. Now, although there were no tunnels found under the Comet Ping Pong Pizzeria, a network of tunnels was recently discovered that makes these rumors not so far fetched.

Daniel Beckwitt, a 27-year-old day trader who lived in Washington D.C. has recently been indicted on charges of second-degree murder and involuntary manslaughter. The charges stem from the death of 21-year-old Askia Khafra—who died digging tunnels for the millionaire under his D.C. home.

On September 10, 2017, a fire erupted at Beckwitt’s suburban home as Khafra worked in the basement. Khafra would be unable to escape and the discovery of his charred remains would lead to an investigation that would reveal the network of tunnels some 20 feet below the basement.

The secrecy involving the construction of tunnels sounds like something out of a Hollywood movie, involving blindfolds and misdirection.

As Boston.com reports, a police report says Beckwitt told investigators how he tried to preserve his project’s secrecy when he brought Khafra there. Beckwitt said he would rent a car, pick Khafra up and drive him to Manassas, Virginia, where he had the younger man don “blackout glasses” before driving him around for about an hour. Khafra spent days at a time working, eating and sleeping in the tunnels. He had his cellphone with him, but Beckwitt used internet “spoofing” to make it appear he was in Virginia, according to Montgomery County prosecutor Douglas Wink.

“These are the lengths the defendant went through in order to hide the truth from Askia Khafra as to where he was and to maintain the secrecy of these tunnels,” Wink said during a May 31 hearing.

Beckwitt lived alone in “extreme hoarder conditions,” forcing the men to navigate a maze of junk and trash, Wink said. The tunnels had lights, an air circulation system and a heater powered by a “haphazard daisy chain” of power strips that created a fire risk, the prosecutor said, according to Boston.com.

The fire started after Khafra had sent a text message to Beckwitt telling him that the tunnels smelled like smoke. After Beckwitt “ignored the obvious signs of danger,” according to prosecutors, he flipped a breaker to attempt to restart the lights, and the fire broke out.

According to prosecutors, Beckwitt told them that the tunnels were for escaping a potential nuclear attack by the North Koreans. Beckwitt’s attorney told prosecutors that his clients concern was similar to that of “the days of the Cuban missile crisis.”

While his attorney is attempting to paint him as having a “paranoid fixation,” Beckwitt’s past raises questions about his intentions as well. According to Boston.com:

Beckwitt lived with his parents at the Bethesda house until college. He enrolled at the University of Illinois, where campus police arrested him in 2013 on charges including computer fraud. He was suspected of installing keystroke logging devices on the Urbana school’s computers. He pleaded guilty and was sentenced to two years of probation, according to online court records.

The conviction didn’t steer Beckwitt away from computers after he moved back to Maryland. In 2016, he spoke at a hacker convention using the alias “3AlarmLampscooter” and wearing a fire-resistant suit and visor that obscured his face.

Wink said Beckwitt was teaching his audience how to make thermite bombs to destroy computer data “in order to get away with hacking.”

Khafra’s family said their son was proud of the work he was doing for Beckwitt, even posting photos on social media to brag about it. Below is one of those photos.

Beckwitt’s trial is set for April 2019 and he remains free on bail. In the meanwhile, the city has boarded up his house and has fined him for creating unsafe conditions and being a “public nuisance.”