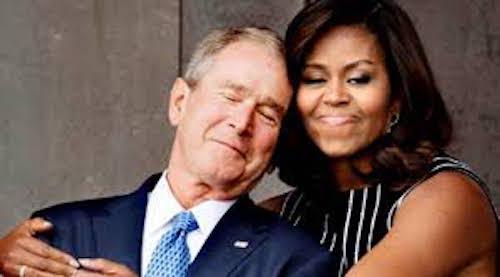 In July 2010, in an article in the American Spectator, “America’s Ruling Class — And the Perils of Revolution,” Boston University Professor Emeritus Angelo M. Codevilla made the trenchant observation that the real divide in America is not so much between liberals and conservatives as between the bipartisan political ruling class vs. the American people.

We saw another display of that bipartisan ruling class at RINO Sen. John McCain’s funeral on September 1, when former president George W. Bush, behaving like an impish schoolboy, snuck a piece of candy to a beaming Michelle “Big Mike” Obama, as their respective spouses, Barack and Laura, smile indulgently.

Who knew that a funeral is an occasion for jovial frivolity?

Wes Walker of Clash Daily points out this isn’t the first time George W. was cozy with Big Mike:

(1) Big Mike hugs George W. during the inauguration of the Smithsonian’s National Museum of African American History and Culture, September 24, 2016:

(2) George W. kisses Big Mike, then the two hold hands and sing to one another at a memorial service for five slain police officers in Dallas, July 16, 2016:

And what was Big Mike doing with his hands in the laps of Barack and George W., as all three and Laura Bush grin as if they’re in on some private joke? What was so amusing at a memorial service for slain police officers?

Dubya must have finally paid off his Progressive Penance by opposing Trump’s nomination. Because it wasn’t so long ago that he was a racist, war criminal and literally Hitler.

For eight long years, the Obamas didn’t have a single nice thing to say about Bush. And now they’re best buds? He must not be the world’s most hated racist anymore.

Maybe it had something to do with Bush having joined the #Resistance.

George W.’s coziness with Michelle O. has not gone unnoticed.

NoMoreWhoresDC: “Broke Back Bush and the Tranny”