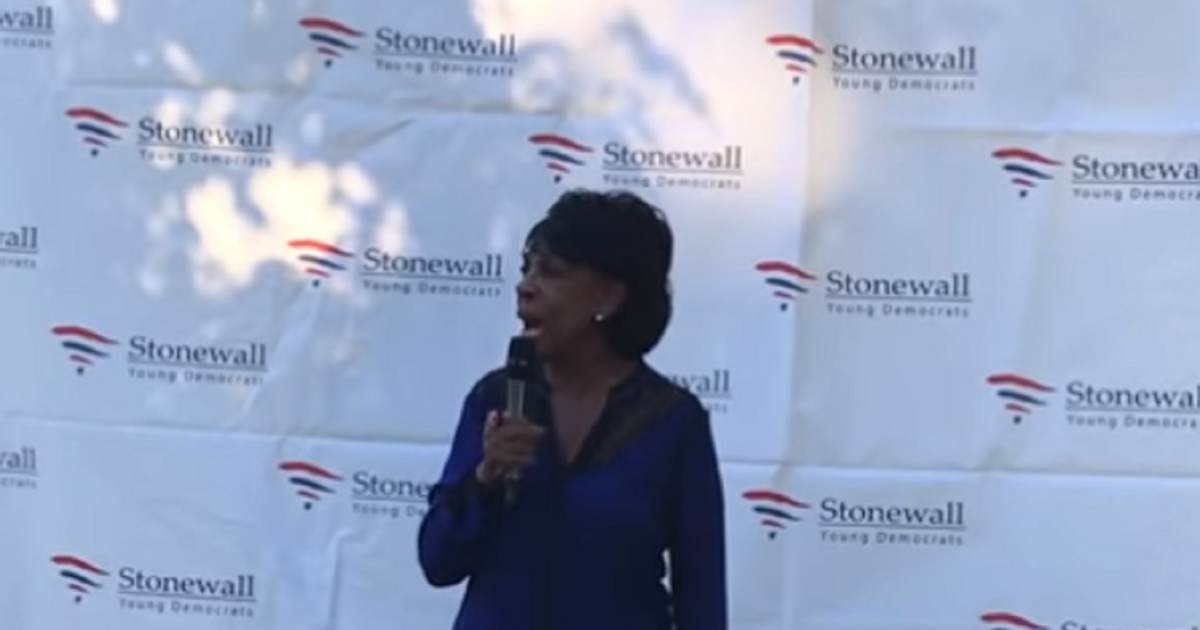 Last week, the Stonewall Young Democratic Club of Los Angeles awarded Representative Maxine Waters (D-CA), and as during her acceptance speech she mockingly said that she threatens Trump supporters all the time.  The comments were Waters’ attempts to justify her comments to incite mobs to confront Trump cabinet members.

Of course, Waters tried to hide behind mere words that said she was not trying to threaten either Trump cabinet members nor his supporters by calling on people to gather mobs to confront them in public, but that is exactly what she was doing.  She was inciting the people towards a confrontation she knew would result in violence.

“I did not threaten [Trump] constituents and supporters. I do that all the time, but I didn’t do that that time,” Waters said as the crowd laughed, knowing that she was lying through her teeth.

Still, she attempted to paint President Donald Trump guilty of the very sins she has been committing.

“What bothered me so much was, they tried to frame that as violence,” Waters said. “That’s not violence.”

“The poster child for violence is the president of the United States. He’s the one who threatens,” she continued. “Don’t forget at his rallies, when he said go ahead and beat them up, I’ll take them out on a stretcher.”

“I do not advocate violence,” she added. “I do not believe you should hit, kick, shoot.”

You don’t, Mad Max?  Then, what is this that you are doing to journalist Laura Loomer when she merely confronted you with a camera and microphone over Waters’ comments regarding inciting mobs against Trump cabinet members?

Sure looks like simple assault to me… and to the DC police.

“We have to tell people the difference between violence and incivility and protesting,” Waters added.

Well, as for civility, her supporters believe that is nothing more than “white supremacy.”

This is a woman that believes she is on a mission from God to “get Trump.”  Her god is the same as every other godless person, the devil.  That’s Waters’ father, by the way (John 8:44).  Not even leaders in her own party can dissuade her from her calls for what everyone knows will become violent confrontations, not because of who they confront but because of those confronting.  Just look at how the Los Angeles Police Department was ready to handle, excuse me flee the scene, as Waters’ supporters and followers showed up threatening Trump supporters with baseball bats and pipes.

Well, that is partially true.  Why did it frighten people?  Because she didn’t just say if you see them tell them they aren’t welcome, she called on people to gather a mob against those people and “push back.”

“If you see anybody from that cabinet in a restaurant, in department store, at a gasoline station, you get out and you create a crowd. And you push back on them. Tell them they’re not welcome any more, anywhere!”

She was even trying to say God was on her side!

Of course, she would later play the victim, canceling events claiming that she had received death threats.

The fact of the matter is that corrupt Maxine Waters should have been arrested for incitement to violence.  She was not engaging in free speech.  She was inciting a crowd.

Maxine Waters, like many in Washington, DC is nothing more than a snake in the grass corrupt politician.  She’s getting up in years and soon, she’s gonna stand before the Judge of all the Earth and give an account, and guess what?  She would be able to hide behind technicalities, word games and “members only elevator” robots covering for her.  And neither will you nor I.