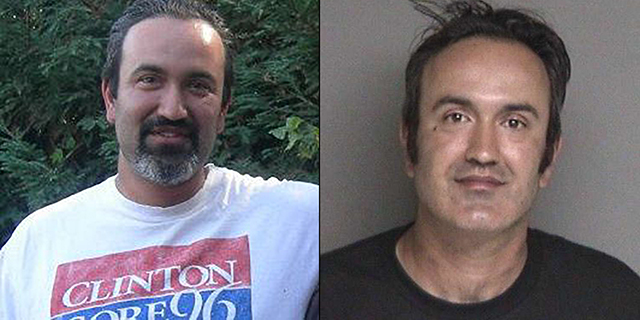 From the SF Chronicle:

A Castro Valley man shouting profanities about President Trump attacked a Republican congressional candidate who was working an election booth at a town festival, threatening him and trying to stab him with a switchblade knife, authorities and the candidate said Tuesday.

Farzad Vincent Fazeli, 35, was jailed after the alleged Sunday attack on Rudy Peters at the Castro Valley Fall Festival. Alameda County prosecutors charged Fazeli on Tuesday with a felony count of making criminal threats and misdemeanor counts of exhibiting a deadly weapon and possessing a switchblade.

No one was seriously injured.

Fortunately, Fazeli was too stupid to operate the switchblade.

In an interview, Peters said he had never been concerned about his safety prior to Sunday, though his wife has often warned him to be careful.

“It’s a shame,” he said. “People are just polarized right now, and this country’s divided and it’s just a mess. It shouldn’t be that way.”

County sheriff’s deputies responded at about 3:45 p.m. to a report of a possible knife attack at the festival on Castro Valley Boulevard. According to officials, witnesses told deputies that Fazeli approached Peters in an “aggressive manner” at his booth, and made “disparaging remarks” about the GOP and “elected officials.”

“All of a sudden we hear someone screaming, “F— Trump, f— Trump!” Peters recalled. He said the man raised his middle finger and was “standing right in front of the booth.” Peters had been sitting with Joseph Grcar, a Republican state Assembly candidate. He said they were both “kind of shocked” by the outburst, but that the man seemed like he was walking off. “The next thing you know,” Peters said, “he stops and turns around and says, ‘I’ll show you,’ and runs at the booth.”

The man grabbed a coffee cup from the table and threw it at Peters, the candidate said, prompting Peters to come around the table and “grab him.” The two wrestled to the ground before the suspect hopped up, reached into his pocket and grabbed the switchblade, Peters said.

“He’s screaming, ‘I’m gonna kill you, motherf—!’” Peters said. “He had the knife but the blade wouldn’t shoot out.”

A sheriff’s deputy said in a court affidavit that Fazeli threatened to use the pink switchblade on Peters but “could not open it.”

Peters said he grabbed a sign from a nearby cupcake booth and braced to use it as a shield. Someone stepped in and urged the attacker to calm down, Peters said, before he left the booth.

[…]Fazeli has past convictions in Alameda County for burglary and battery, records show. On his Facebook page, he criticized Trump for “complacency” following this year’s mass shooting at Marjory Stoneman Douglas High in Florida. In another post, he wrote “Hurricane Irma … Payback for voting Donald Trump.”

Fazeli is licensed to work as a security guard in California, according to state documents.

Is the fake news media going to take any responsibility for the climate of hate they’ve created?

This violence comes on the heels of the Congressional baseball mass shooting carried out by a Bernie Sanders supporter pumped full of fake news and the near-murder of Republican congressman Rand Paul.

Maxine Waters is still telling her supporters to threaten Republicans out in public:

Fazeli’s Facebook shows he’s a March For Our Lives supporter who wants to disarm the American public, presumably so he and his ilk can have an easier time killing us: