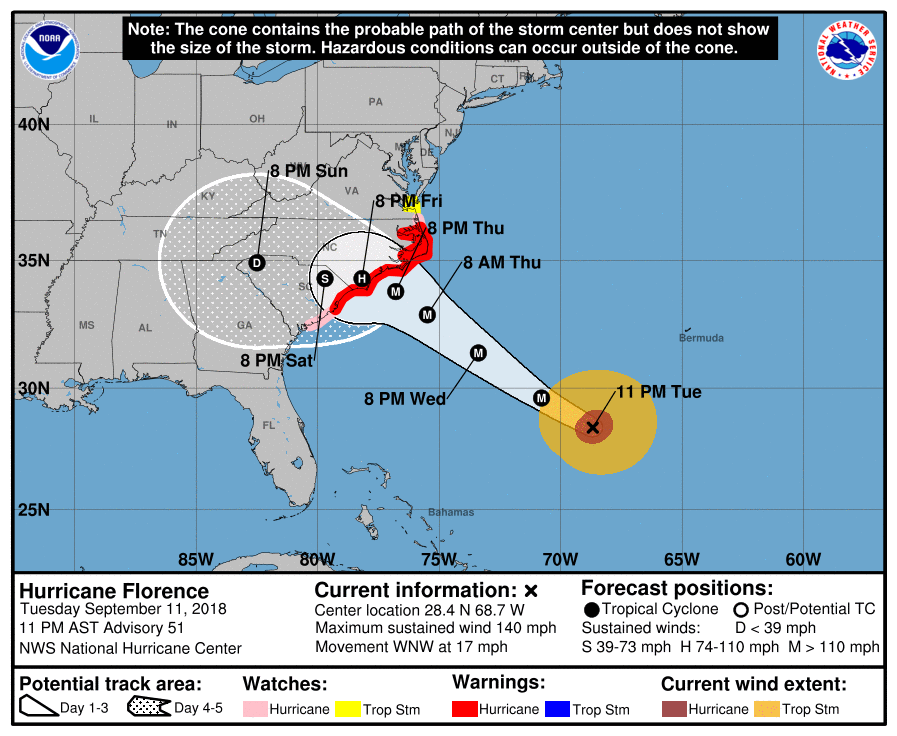 Hurricane Florence is about to make a “direct hit” on the east coast, and public officials are making one ominous declaration about this storm after another.  Florence is being called “extremely dangerous”, “a monster”, “the worst in 60 years”and “the storm of a lifetime”.  By the end of this week we shall see if this storm lives up to the hype, but at this point it is definitely an immensely powerful storm.  Hurricanes of this magnitude very rarely come this far north, and panic is starting to set in all across the mid-Atlantic region as people realize that this is really happening.  Over a million people are in the process of evacuating, and it is being reported that there is “fighting for food” at the stores that still have some supplies left…

Reilly Norman described it as “a mess in there; it’s wiped out clean.”

“We came around 1 and all the waters were gone,” said Blake Swain. “Now, it’s just people fighting for food.”

Interestingly, federal officials actually conducted a “simulation” that involved a category 4 hurricane hitting the mid-Atlantic region back in late April and early May…

That “simulation” produced “catastrophic damage” along the east coast, and as a result some experts are now concerned “that Hurricane Florence could produce a disaster comparable to 2005’s Hurricane Katrina“…

A fictional “Hurricane Cora” barreled into southeast Virginia and up the Chesapeake Bay to strike Washington, D.C., in the narrative created by the Federal Emergency Management Agency and Argonne National Laboratory.

The result was catastrophic damage, which has some experts concerned that Hurricane Florence could produce a disaster comparable to 2005’s Hurricane Katrina and in a part of the country that is famously difficult to evacuate.

Let us hope that does not happen, because New Orleans still has not fully recovered from Hurricane Katrina after all this time.

But at this point things look very grim.  The computer models are predicting a storm surge of somewhere around 20 feet and up to 45 inches of rain in some parts of North Carolina.

In addition, it is being projected that the insurance industry could be facing up to 20 billion dollars in losses.

And all of those numbers assume that this will remain a Category 4 storm.  According to CNN, there is still a possibility that Florence “could become close to a Category 5 storm” before it slams into the Carolinas…

As of Tuesday morning, Florence was hurling 130-mph winds. Before it pummels the US coastline, Florence could become close to a Category 5 storm — meaning winds could approach 157 mph.

But even a Category 4 storm would be immensely devastating.

A 20 foot storm surge would cause more damage than the wind or the rain from the hurricane would.  It would essentially be a giant “wall of water” that would “swallow parts of the coast”…

Storm surge is basically a wall of water that could swallow parts of the coast.

“This will have a storm surge in the 20-foot range,” Myers said.

And meteorologists are warning that in a worst-case scenario we could actually see Florence stall along the east coast for an extended period of time.  According to the Weather Underground, this is how that could happen…

The steering currents driving Florence toward the East Coast will collapse on Friday, and models now agree the storm is likely to stall somewhere within 100 miles on either side of the coast, perhaps for one or two days.

The 12Z Tuesday run of the European model introduced a new and very distressing possibility: Florence stalling just offshore of North Carolina near Wilmington for roughly a day, then moving southwestward along and just off the South Carolina coast on Saturday, and finally making landfall close to Savannah, Georgia, on Sunday—all while still a hurricane. This outlandish-seeming prospect gained support from the 18Z run of the GFS model. It painted a very similar picture, with a landfall a bit farther north, near Charleston, on Sunday. The 18Z track from the experimental GFS FV3 model is very similar to the GFS track.

In such a scenario, the damage caused by this storm would be multiplied.

To say that this storm is “dangerous” would be a major understatement.  And let us not forget that there are 12 nuclear power reactors directly in the path of this storm.  If things go bad, they could go really, really bad.

As the storm draws closer to the coast, federal officials are begging people to get prepared…

Federal officials begged residents to put together emergency kits and have a plan on where to go.

Of course those that have waited until now may find that it is already too late.

Gasoline stations all over the mid-Atlantic are already running out of gas, and store shelves are being “picked clean” of essential supplies…

Long lines formed at service stations, and some started running out of gas as far west as Raleigh, with bright yellow bags, signs or rags placed over the pumps to show they were out of order. Some store shelves were picked clean.

“There’s no water. There’s no juices. There’s no canned goods,” Kristin Harrington said as she shopped at a Walmart in Wilmington.

A “perfect storm” is literally heading for the east coast, and some believe that this could be a metaphor for what is happening to the nation as a whole.

For those of you living in the mid-Atlantic, please get out of the path of this storm, and our prayers are with you.