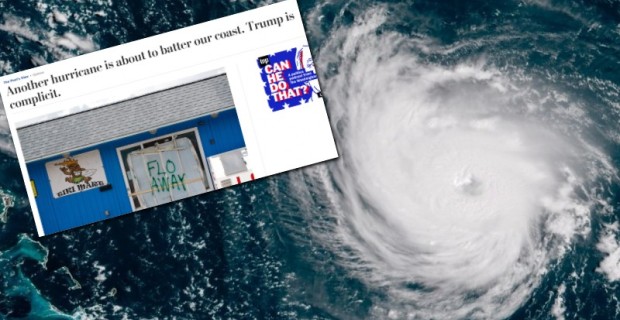 The Washington Post has truly jumped the shark by blaming President Trump for Hurricane Florence.

In one of the most brazen displays of Trump Derangement Syndrome yet witnessed, the Post’s editorial board published an article under the absurd headline Another hurricane is about to batter our coast. Trump is complicit.

“When it comes to extreme weather, Mr. Trump is complicit. He plays down humans’ role in increasing the risks, and he continues to dismantle efforts to address those risks. It is hard to attribute any single weather event to climate change. But there is no reasonable doubt that humans are priming the Earth’s systems to produce disasters,” states the article.

So in other words, the Post admits that individual weather events are not good indicators of man-made climate change, but that Hurricane Florence is basically man-made and Trump is to blame.

Opinion: Another hurricane is about to batter our coast. Trump is complicit. https://t.co/T8X2D10Hgv

In addition, numerous scientific studies show that nearly all extreme weather is declining or at or near record lows.

But why should science matter when it’s so much more convenient to blame Trump?

The Washington Post editorial is equally as stupid as when actress Jennifer Lawrence suggested that extreme weather that occurred during last year’s hurricane season were a result of Mother Nature punishing America for voting for Trump.

“You know, you’re watching these hurricanes now, and it’s really hard, especially while promoting this movie, not to feel Mother Nature’s rage and wrath,” Lawrence said.

“I’ve heard things and seen things on TV in my own country that devastate me and make me sick, and it’s just really confusing,” she added.