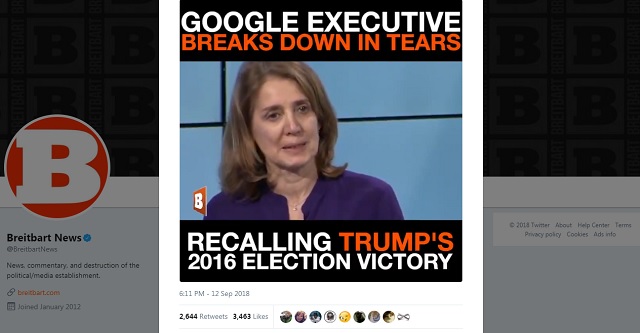 A video recorded by Google shortly after the 2016 presidential election reveals an atmosphere of panic and dismay amongst the tech giant’s leadership, coupled with a determination to thwart both the Trump agenda and the broader populist movement emerging around the globe.

The video is a full recording of Google’s first all-hands meeting following the 2016 election (these weekly meetings are known inside the company as “TGIF” or “Thank God It’s Friday” meetings). Sent to Breitbart News by an anonymous source, it features co-founders Larry Page and Sergey Brin, VPs Kent Walker and Eileen Naughton, CFO Ruth Porat, and CEO Sundar Pichai. It can be watched in full above. It can and should be watched in full [here] in order to get the full context of the meeting and the statements made.

It was reported earlier this week that Google tried to boost turnout among the Latino population to help Hillary Clinton, only to be dismayed as the usually solid Democratic voting bloc switched to the GOP in record numbers. This video shows a similar level of dismay among Google’s most high-profile figures.

These individuals, who preside over a company with unrivaled influence over the flow of information, can be seen disparaging the motivations of Trump voters and plotting ways to use their vast resources to thwart the Trump agenda.

Co-founder Sergey Brin can be heard comparing Trump supporters to fascists and extremists. Brin argues that like other extremists, Trump voters were motivated by “boredom,” which he says in the past led to fascism and communism.

The Google co-founder then asks his company to consider what it can do to ensure a “better quality of governance and decision-making.”

VP for Global Affairs Kent Walker argues that supporters of populist causes like the Trump campaign are motivated by “fear, xenophobia, hatred, and a desire for answers that may or may not be there.”

Later, Walker says that Google should fight to ensure the populist movement – not just in the U.S. but around the world – is merely a “blip” and a “hiccup” in a historical arc that “bends toward progress.”

CEO Sundar Pichai states that the company will develop machine learning and A.I. to combat what an employee described as “misinformation” shared by “low-information voters.”

They’ve put all this censorship into practice and more.

They’ve banned or heavily demoted nearly all alt-media sites from Google search results and they’ve rigged YouTube search results to favor only major media propaganda outlets. They also banned Alex Jones and hundreds if not thousands of other right-wing channels for so-called “hate speech” and other nonsense (America does not have hate speech laws).

Big Tech is using the full power of their multi-trillion dollar megacorporations to interfere in our elections in favor of Democrats while the media and congress whine about a few million spent by Russia to share B-Tier memes on Facebook and Twitter!

This is criminal interference in our election and dystopian social engineering far beyond George Orwell’s 1984. If these companies are going to work in concert with the Democrats, the SPLC and the ADL to wage war on America and our First Amendment rights, then they need to be broken up, regulated into the ground or outright nationalized!

.@google needs to explain why this isn’t a threat to the Republic. Watch the video. Google believes they can shape your search results and videos to make you “have their values”. Open borders. Socialism. Medicare 4 all. Congressional hearings! Investigatehttps://t.co/jlbSgMMrLT